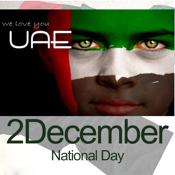 National Day (Arabic: يوم استقلال الإمارات العربية المتحدة‎) is celebrated on 2 December each year in the United Arab Emiratesfor two days or more. It marks the UAE's formal independence from the United Kingdom and the eventual unification of the seven emirates in 1971 which combined to form the modern-day country. The union became independent on 2nd December 1971.
On 2 December 1971, all emirates except for Ras Al Khaimah, united as a country at the suggestion of H.H. Sheikh Zayed Bin Sultan Al Nahyan, H.H. Sheikh Rashid Bin Saeed Al Maktoum, and his other brothers, the rulers of other emirates. Ras Al Khaima joined later as a part of the country. Qatar and Bahrain were also suggested to be a part of the country but they declined the idea.Rulers of the emirates meet and review national topics
People celebrate this day with flags and drawings on their faces. They also go on streets and celebrate this day with decorated cars and traditional dances. The locals also do a "Maseera", in which people go on the road and drive around the Emirate in celebration with music, poems, and many, many flags.