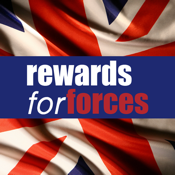 Up until now most high street stores have offered special discounts to students, whilst discounts for the forces community have been rarely recognised. ‘Rewards for Forces’ have been campaigning to change this, in the belief that our troops deserve recognition and respect from British businesses in return for their efforts in keeping our country safe. Rewards for forces have been contacting hundreds of high street stores requesting that they become ‘Forces Friendly’ stores and offer USEFUL discounts to troops in the same way they currently do with student discounts. An extensive list of the discounts available to members of the forces can be found using this FREE app. Forces members can join now totally FREE of charge.

How much can forces expect to save?
Every company listed on www.rewardsforforces.co.uk is offering discounts/benefits not available to the general public, Forces can expect to save between £550 and £1000 on average each year. Discounts from Restaurants & take aways, Theme Parks and Attractions, Local Offers from the high street, Theatre Breaks, Health & Fitness, Sport & Outdoors, Motoring & Car Hire, Holidays and Travel, Short Breaks, Special Occasions, Phones & Computers, Football Clubs, Insurance, Discounts in USA & Canada.

Optional ID card available for proof of eligibility for discounts
www.rewardsforforces.co.uk are offering a optional solution to proving eligibility by providing Forces, Veterans, Families with an identification card to prove their entitlement to discounts within Forces friendly stores. The cards will ensure that discounts are only received by this community and are an easy way of staff identifying those who are entitled to defence discounts and those that are not.

If you are part of our forces community, this app is for you!
Serving personnel and their partners of the Navy, Army, Air Force and Veterans, Service Widows/Widowers, Reservists, Cadets, MOD Civil Servants and the Royal British Legion are all welcome. Visiting members of the US & Canadian forces are also eligible to use the App.