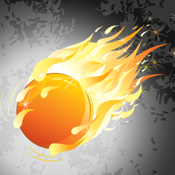 Developing your magical skills is more fun than ever! Harness the primal forces of fire, ice, air and earth. Rise through the ranks in powerful magic schools. Become a Master of Elements.

An orb impacting another of the same color triggers magical reactions. Your goal is to create long chains of such reactions by strategically removing orbs with your wand. Triggering the rare magical orbs releases element powers stored inside, and helps keeping the chains going strong.

Your powers become stronger with each rank. But don't be in a hurry to get there. A novice can sometimes beat a master.

HARNESS THE ELEMENTS
* Collect precious gem fragments as you play
* Customize magic wand with powerful gems
* Blast, zap, and crush with the power of the elements
* Rare gems add mighty new abilities to your arsenal


ENDLESS FUN
* Rise from lowly novice to grandmaster in four powerful schools of magic
* Keep on playing after you have gained the highest ranks. The competition has just started!
* Challenge your friends and vie for supremacy at the Grandmaster's Tower
* Over 50 Game Center Achievements to unlock. Become a Chain Legend!