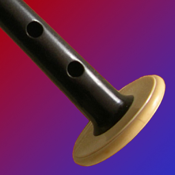 MIDIChanter is a Scottish Bagpipes MIDI practice chanter for the iPad.

MIDIChanter doesn't produce any sound on its own, it is designed for playing hardware and software VST-style MIDI synthesizers via a CoreMIDI compatible interface connected to the dock connector or virtual MIDI instruments like Roland Sound Canvas for iOS, Universal Piper, or Sonosaurus ThumbJam running on your iPad.

IMPORTANT: Since this app requires as many as 8 fingers on the screen at the same time, before playing, disable "Multitasking Gestures" on your iPad (in the iPad Settings app, under the General section, turn the Multitasking Gestures switch to the off position).

The chanter fingerings are based on those used for the Scottish Highland Bagpipes (as well as other related smallpipes).

MIDIChanter supports two independent MIDI channels, emulating the operation of the drones and chanter of a set of Scottish Highland Bagpipes.

Touch the drone puck to start/stop the drones. For the Highland pipes, you'll want to set the drone transposition two semitones higher than the chanter.

Touch the bar at the top of the screen with your left thumb. It represents the hole on the back of the chanter for the highest note and must be covered for other lower notes to play.

The app uses chanter fingerings based on those for the Highland pipes.

Next, touch the top half of the chanter starting with the tips of your left index, middle, and ring fingers.

Finally, touch the bottom half of the chanter with the tips of your right index, middle, ring, and little fingers.

Touch the MIDI connector icon on the bottom left to bring up the MIDI parameter controls.

You may select the MIDI channel, attack velocity and volume for the chanter and drones independently using the sliders at the top of the screen.

The entire range may be transposed up or down (zero transpose is "C") up to one full octave in semitone increments using the chanter and drone transpose sliders.

Use the "Transmit MIDI Port" switch to choose between "Omni" sending MIDI data to all CoreMIDI apps (matches previous versions of MIDIChanter) or "Virtual Port" sending to a named CoreMIDI virtual output port. When the "Virtual Port option is selected, MIDIChanterwill show up as an input option in apps that support virtual ports like Sonosaurus ThumbJam and MidiBridge. "Omni" mode is selected by default.

All MIDI settings are saved when MIDIChanter quits and restored the next time it is run.

Touch the '?' icon to show the help screen.

Touch the 'Shhh' icon on the upper left corner to quiet any "stuck" notes if they occur.

Here's how to use the app with several popular synthesizer apps:

Refresh the MIDI inputs and when MIDIChanter shows up, enable it by clicking on the dot next to the name (should turn green)

You should now be able to play like any other hardware MIDI chanter.

- The "Channel Start" value in "Input Options" is already set to 1 by default.

Other CoreMIDI compatible synth apps will have similar settings.

Be sure to visit the AppCordions.com website for MIDI setup and demo videos!