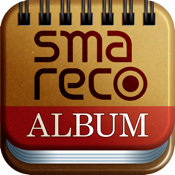 Sumareco Album is an application that allow you enjoy to design Digital Album easily from your capture picture in your smartphone.

For the data of your Picture, you will able to share in each cloud service, such as E-mail and As a PDF.
In addition, it allows you to data reduction with a trapezoid-color correction automatically when you shoot a Sumareco album, to enjoy as a digital album in the same way Application.

Features
1.You can easy to make a digital album with photo you have taken.
2.You will able to share in each Cloud service, Such As E-mail and As a PDF.
And Also, You can share your album page by page as jep.img
3.You can make original album by choosing the type of Backing sheet, Album cover, or the title.
4.If you shoot a Sumareco scrap album, with this Application you can enjoy to make digital album, by automatically it can control the color and the data correction on the keystone.
5.With The color correction function, You can do adjustment the color for the image.


Instructions
1.( make the album )
Run the Application and choose your album name, album design, and the cover you want to make, and then choose your source data that you want to use (camera or camera roll)
※If you want to use a Photo you have taken, Select “camera roll”. Or Select “camera” if you want to shoot a Sumareco scrapbooks.
2.Make Album from images was taken.
Select Camera roll. The camera roll will recover and then Select the images that you want put in to the album. The images will be loaded to the Application,
Tap “Done” if it’s complete, and “Add” if the read continuing.

3.”Make Album from Photo was taken
Select (Camera) it will take you to the shooting screen.
If you take the picture, you can make album from photo that you have taken.

“When shooting a Sumareco album”
Press the “Recognition” Button, After you Moved to shooting screen. And then, White frame will be displayed in the four corners of the screen.
To take Picture, Put in the Black triangle in the four corner of the Scrapbook, and this will allow you to take the each of white frame displayed.
When Recognized is correct, by automatically it will fixed tilt, and correcting the color into the album.
Tap “Done” if it’s complete, and “Add” if the read continuing.
4. Color correction and image of the replacement of the page.
You can do Color Correction and image of the replacement of the page from the image of photo -album that you have finished.
Frist, Open the Album. then Tap “List” Button on the Right side above the screen.
When List page appeared, if you want to replace the page, tap longer for the album you want to replace, then move it to place that you want to swap.
If you tap lightly, it will become selected state and a mark will appear in the image. With that situation if you press “Edit” Button under the Screen, Color Compensation Page will appears. In This Page you can edit the Contrast, Brightness, and saturation.

Notice
( Application user )
●For sending the Album data created by email, there is possibility not able to send It depending from the size of data.

(Sumareco Album user )
1.To Prevent Mistakes due to shadows when shooting, uphold The Sumareco album, then shoot it.
2. Enter the mark of the 4 corner on the page, and then, please adjust the position of the terminal.
3. Shooting in bright places as much as possible, please go from the front as much as possible.
4. The keystone correction will be done by mark of the 4 corners.
The mark by writing pen or masking tape will be deformation or will be lost and there is a possibility will not be read correctly.