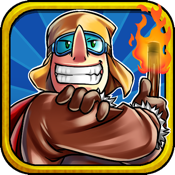 Two opposing castles on one battlefield. Destroy each other with a comically large cannon, armed units and an armada of spells!

See the destruction on each castle in real time and strategize your cannon shots by using the right artillery, watching the constantly shifting wind and aiming for the essential parts of your enemies castle! Up the ante by rushing towards your enemies with strategically summoned armed units and react to the enemies actions with defensive maneuvers and spells!


More raving reviews:
"...it’s obvious the team at Gangogames & Fabraz are going all-out to make this one a big value." IGN - Justin Davis

"...Cannon Crasha is a great addition to any iPad game library and a must-have for fans of games like Angry Birds." TUAW - Mike Wehner

"..Cannon Crasha has enough to keep you entertained for a long time." IGM - Christian Leed

"So to sum up, Cannon Crasha has cannons, castles, depth, sharing, a sense of humor, and probably a few surprises on top of all that." GameZebo - Nick Tylwalk

We DO NOT SUPPORT iPhone 3GS or iPod 3rd Gen and below.