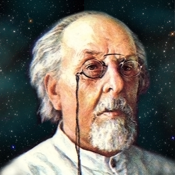 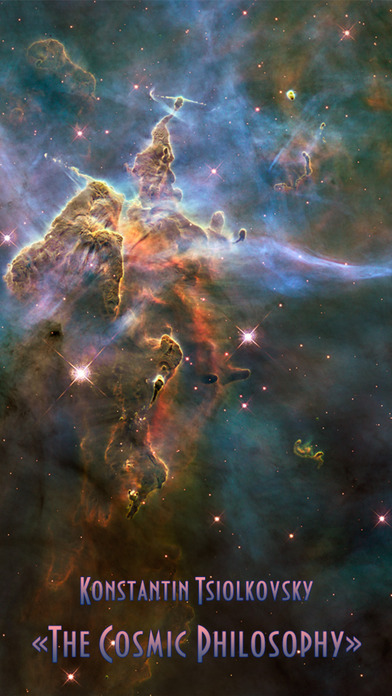 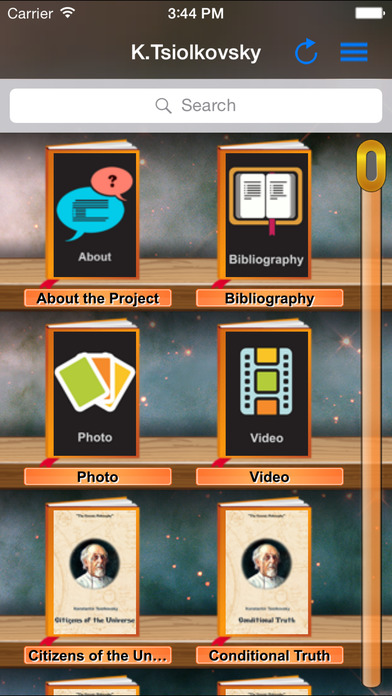 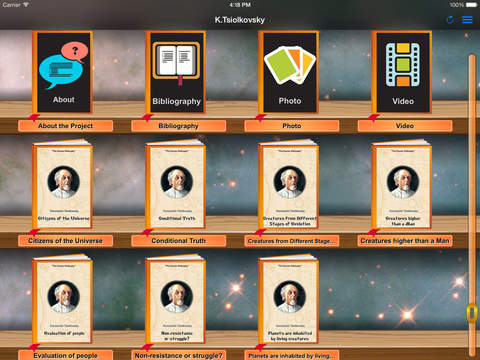 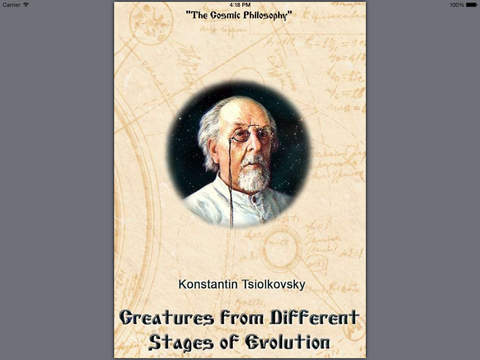 This multimedia e-book (in English) is compiled on the basis of philosophical writings by Konstantin Tsiolkovsky, devoted to such basic issues as sense, purpose and way of a Man.

This book includes not only the articles Konstantin Tsiolkovsky wrote on this subject, but also the archived photocopies of these articles, with the author's penscript, as well as videos about life and works of this great scientist.

The application will be regularly updated - works by K. Tsiolkovsky will be included into the e-book as soon as they are prepared for publication.

K. Tsiolkovsky named the aggregate of ideas, hypotheses, theses, which formed the core of his philosophical works, “The Cosmic Philosophy”. Its central element is a doctrine (worked out using scientific methods) regarding sense of life and its understanding in the process of implementing moral practice.

We can figure out how important these researches were for humankind from Tsiolkovsky's own assertion that creation of his rocket science theory was only a complementary result, an addition to his philosophic works.

The scientist wrote a great number of philosophical works, which are little-known to general reader because these works used to be suppressed for decades. These books are an attempt to break through the "plot of silence" over the philosophy created by the Russian space prophet, discoverer and solver of the problems, which beginning of a "space era" put before human civilization.

New way of thinking is impossible without debunking so-called "conventional consciousness", without looking for sense of life beyond daily routine – in the unity of inhabited space.

“Be attentive, strain every nerve to comprehend and understand the asserted. My energy is hardly sufficient to convince you. Add yours and your friends’. No authorities I will allege to in my work, except for authority of exact science, because philosophers with just the opposite opinions can well be found.
In general, there is no postulate or concept, which has never been rejected by authorities. Authorities rejected Socrates and all philosophers; they rejected railways, sewing machines and all other inventions. Have a glance at the history of science and technology. There is no single idea which was not rejected by some authorities at one time or another.
For your tension, for your attention you will be rewarded – I will not say hundredfold, it is too little, but infinitely. There are no words for expression of this goodness you will get for your effort. There is no measure for this goodness. This measure is infinity.”
“The Living Universe”
K. E. Tsiolkovsky, 1923.


Konstantin Eduardovich Tsiolkovsky (17 September [O.S. 5 September] 1857 – 19 September 1935) was an Imperial Russian and Soviet rocket scientist and pioneer of the astronautic theory. Along with his followers the German Hermann Oberth and the American Robert H. Goddard, he is considered to be one of the founding fathers of rocketry and astronautics. His works later inspired leading Soviet rocket engineers such as Sergey Korolyov and Valentin Glushko and contributed to the early success of the Soviet space program.