How to Defeat the Bigger, Stronger Opponent. Volume 3: 'Top 5 Moves' with Emily Kwok and Stephan Kesting 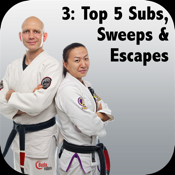 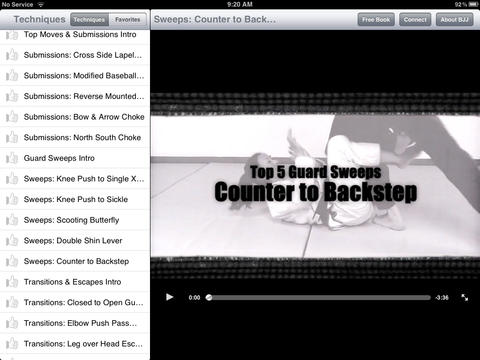 Top 5 Submissions, Sweeps, and Escapes App is the third app in the 'How to Defeat the Bigger Stronger Opponent' series featuring world champion Emily Kwok and Stephan Kesting from Grapplearts.com.

This app features a no-nonsense collection of the ‘go to’ moves Emily uses most frequently against larger skilled opponents.

Larger grapplers often just use their their strength, size and weight advantages to overpower you. It’s very frustrating to get pinned and smothered by a less skilful opponent whose only advantage is having 10, 20 or 50 pounds of additional muscle.

Big guys have much stronger upper bodies, which is why they can just ‘bench press’ his way out of a bad position. But if you try this then not only will it be ineffective but it will leave your arms limp, drained, and feeling completely powerless.

Plus it’s scary when big guys don’t know how to control their strength and weight, and have no clue how to train with smaller people. Injuries are the bane of training, and are often caused by Sasquatch-like grapplers who go totally ‘agro’ when their egos are threatened.

In this series of apps you’ll have two Brazilian Jiu-Jitsu black belts show you the techniques and strategies to defeat even the biggest, strongest, scariest attackers on the ground. Crazy speed, flexibility, or athleticism are NOT required; the emphasis is on staying safe and preventing injuries at all times.

Emily is a multiple time BJJ world champion, both with and without the gi. She has taught and worked with thousands of grapplers of all levels.

Emily faces people bigger than her on the mats every single day, and she’s learned that the single-most important thing you can do to stop a larger opponent from rag dolling you all over the mat is to control the grips.

Emily starts off by sharing her five most reliable submissions (four chokes and one armbar) that you can use to make even the biggest grapplers say uncle and tap out.

Then she teaches you the five specific guard sweeps she hits most often on bigger people in training and competition. No matter how strong or heavy your opponent is, he’ll have no choice but to topple over when you hit him with these surprising techniques.

Finally Emily takes you through her five favorite transitional escapes. The best time to escape a pin is before it’s been finalized; this section teaches you how to recognize those escape opportunities and the exact steps you need to get out of that bad position and get back in the game.

This is a unique opportunity to learn the highest percentage techniques of one of the top female black belts in the world. If she can use these then so can you. This app contains zero fluff and is filled with 100% hard-hitting content that you can start using on the mats today!!

* 1 hours and 15 minutes of solid, filler-free, video instruction
* All the footage has been professionally filmed and edited for maximum ease of learning
The app includes complete menus for easy navigation
* You can create a list of your favourite techniques and drills using the one-click ‘favourite’ button
* The app is designed to download to your phone or iPad; an internet connection is NOT required to view the videos
* BONUS: ‘The Roadmap for Brazilian Jiu-Jitsu’ book for free!