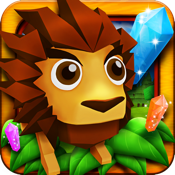 Thank you for playing SummerTimeStudio games.

Many reports have been coming in concerning
apps not working properly on devices running iOS 9.

After investigating the issue, problems have been
discovered with the following operating systems:
a. iOS 9.0
b. iOS 9.0.1
c. iOS 9.0.2


We are currently working on fixing the problem.
Once a schedule for the fix has been established,
we will put out another notice.

We (SummerTimeStudio) are a game developer based in Okinawa, Japan, and we would like to present to you our 7th game app, “Animal’s Jewel”! Please enjoy our realm of cute and cuddly animals.

This game is designed to be enjoyable for people of all ages.
Children and adults can play together to maximize the fun!

The objective of this game is to keep calm and place the animals strategically to defend the “jewels” from the invaders from out of space!

Once upon a time there was a world that animals lived in peace and harmony.
In this world there were “jewels” that the animals treasured as their guardian. These jewels provided the animals with the power to live, and maintained order of nature across the land.

One day, alien invaders came uninvited into their world to steal the jewels away from them!  The animals decided to stand up together and fight against these intergalactic scumbags!
You have been appointed to be the commander of the animals to fight against the aliens to defend not only the “jewels”, but also the right to once again live in peace.

There are 17 animals featured in this game each with their own characteristics and abilities. Some animals have special abilities that help other animals around them, put your enemies to sleep, and more!
You can unlock them by clearing levels and by saving up “Special Apples” which can be gained through playing the game.

Remember to keep calm and think carefully where to place your animals to maximize their ability!

Here are some hints:
Placing animals where it can attack or affect two paths or placing them in a corner could raise their efficiency in battle.
Most of the maps require the aliens to return to base on the same route, giving you two opportunities to damage them!

[Requirements]
iOS 5 or above.
iPhone 4 or above.