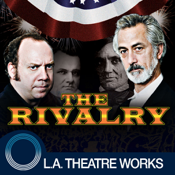 Academy Award-nominees Paul Giamatti and David Strathairn star in Norman Corwin’s electrifying dramatization of the history-making Lincoln-Douglas debates. This fierce rivalry between rising legislator Abraham Lincoln and incumbent Senator Stephen A. Douglas tackled some of the day’s most passionate and controversial issues—above all those of slavery and the American concept of freedom. As seen through the eyes of Douglas’ young wife Adele, the play illuminates two of the most charismatic politicians of any era.


Directed by Eric Simonson. Recorded before a live audience at the Skirball Cultural Center, Los Angeles.