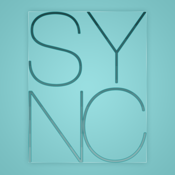 Synchronism is an app to help you with the timing of the audio and video on your home entertainment, editing, or basic media playing system. In brief, Synchronism watches for an image flashing on your monitor/TV and listens for a short burst of audio that should happen at exactly the same time. When they don't Synchronism shows you the difference between them and whether it's the video or the audio that's delayed.
Although a good, new TV should ensure that the audio and video are played in sync, depending on your setup or the age of the monitor/TV there is a good chance that they're slightly out. Typically you could be seeing the video one 'frame' later than it should be.

Everything you see on a TV is made up of a certain number of still images per second – just like film. Each of these images is called a 'frame'. The two big frame rates are 25 frames per second (fps) and, in North America, 29.97fps. There are also 60, 59.94, 50 and 30fps rates but the 25 and 29.97 are still the most prevalent. In fact, with the advent of so many computers and multi-media players, pretty much any frame rate is possible with some manufacturers looking at 100fps for future products.
Some systems can take the duration of one TV frame to correctly process and then display each of the still images in your programme or footage. In this case the video will reach the display after the corresponding audio has reached the speakers. Often this happens when you're trying to watch a standard definition programme on a high-definition screen. Very generally speaking, audio won't take any time to process before it's sent to the speakers but with Dolby and the like being fairly easily available it's now possible for an entire system to have very different processing times for the audio and the video.
If you can generate a movie clip that you know to be in sync, on your a/v system then you can use Synchronism to test the timing of the path that the video and audio takes in getting to the screen and speakers.

Synchronism can play the flashing frame and audio burst for you with the help of a Lightening Digital AV Adapter: plug the adapter into your phone and the HDMI output into your screen and Synchronism will automatically change the control window to show a play button. Set the movie file running and point the phone at the screen showing it (check your cable is long enough!). NB: your system should be capable of accepting audio through the HDMI socket. Some don't so please check before using the Lightening adapter.

The easiest way to fix any problem is to check your system for any settings that can correct the sync: it's often called 'lip-sync' on home entertainment systems or 'playback delay' on editing software. This will allow you to dial in a correction to the video or audio that brings it all into sync.

If you haven't got a setting for this then you can search the web for 'lip sync corrector'. This should bring up a few options for small, reasonably priced delay boxes that can be placed just before your speakers and set to correct an error.

Synchronism has been tested in a broadcast standard editing suite the output of which has passed Tech Review for UK transmission but you should bear in mind that the iPhone is a phone first and the iOS - rightly - doesn't allow apps to take complete control of all background tasks. As a result perfect timings can't be guaranteed every single run.