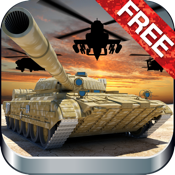 Have you ever wondered what's faster?
A US Fighter Jet or Russian Mig?
A Blackhawk Helicopter or a P-51 Mustang?
A F-16 Eagle or a F-14 Tomcat?
A Korean or a Russian Tank?
An M1-Abrams Tank or a Hummer SUV?

What about mashing them up?

Is a Modern Tank Faster than the WWII Helicopter?
How about an Apache Helicopter vs. a WWII Plane?

What’s Faster is the interactive game suitable for all ages that puts players in the driver’s seat. It’s a race between two objects—you try and determine which one is faster.

With the upgrade, players choose from categories such as cars, motorcycles, aircraft, jets, tanks, animals, fish, athletes, helicopters, roller coasters and much more.

This Lite Military version includes planes, helicopters and tanks. To be able to earn other rounds you must upgrade inside the app to the full version.

The game comes with an astounding 625,000 comparisons so the game is always fresh and new.

In addition to the fun of comparing speeds, the app also includes interesting facts about every item in the game to help you learn about the world of speed. Radar guns built into the game help players get out of a jam by clocking the speeds and getting a hint to whats faster.

The game idea came from William, an eight year old boy always asking his father, “Dad, what’s faster a Mercedes Benz or a Lamborghini, a F-16 jet or a Russian Mig-25 fighter, a Ford GT or a Chevy Corvette?” The father and son worked hard for almost a year and developed the ultimate comparison game that helps you understand how fast the world around us moves.

If you run out of the 50 included radar guns, more are available for an in-app purchase.

Thanks for your support! Let’s figure out What’s Faster!!!