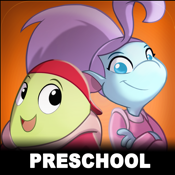 An independent study by Kent State University determined that kids who played Zorbit's Math Adventure for Preschool for as little as one hour a week for three weeks were six months ahead of those who didn't play the game at all.

Girls and boys will have a BLAST tagging along with young space aliens Zorbit and Zippy and their friends as they get ready to take off for Planet Earth. The game’s six action-packed levels add up to one great story! Along the way, there are tons of encouraging words – and lots of stickers – to help kids learn.

They’ll learn all the math they need to know to be ready to start school – counting to 20, shapes, colors, and ideas like “inside and outside” and “same and different.” Stuff you might not even think of as math. And for moms and dads of preschool kids in the US, it’s aligned with the Common Core math curriculum for PreKindergarten. (For our friends in the UK, that would be maths.)

WHAT FOLKS ARE SAYING ABOUT ZORBIT . . .

“Of all the games in my ‘Kids’ folder, it’s the most used and often the first one my daughter goes for. It’s fun, entertaining and educational. The perfect mix for pre-schoolers.” Today’s iPhone

WE DIDN’T WANT TO SAY IT OURSELVES, but

“Oh, and the pet – Oswald – burps and poos. This may well be the killer feature in this app for most pre-schoolers that we know…” App Playground

Kids don’t need to be able to read to succeed with Zorbit. They can play without help from mom or dad. (And because they’re learning, you don’t have to feel guilty!)

Best of all, Zorbit looks and sounds great, just like kids’ favorite TV shows. So you know they’ll want to play!

The tutorial level helps the youngest ones learn their way around an iPad, iPhone, or iTouch while teaching the numbers 1-5.

One really neat feature automatically drops the volume level by 5 decibels when headphones are plugged into the device while your child is playing Zorbit.

THE BORING BUT IMPORTANT STUFF . . .

Make the years before Kindergarten count for your kid!

Best Boy Entertainment is committed to your complete satisfaction. Have technical questions? Check out http://zorbitsmath.com/info/support-2/. Feedback is always welcome at support@zorbitsmath.com.

If you happen to be a parent to a preschooler and are looking for apps that offer an educational component mixed with fun, here's a selection that may fill exactly what you're looking for.