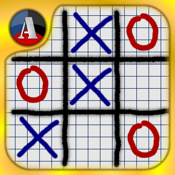 Simple and fun strategy game. The classic game of childhood.
The game graphics are inspired by a piece of paper out of a notebook in the box :)
The game is to combine in a row after a straight or diagonal line of the same patterns, alternating with the opponent. The winner is the first to work out in a row its three identical patterns. You Garc a computer or another player. You can play in three game modes:
★ single player (playing on one device with a computer)
★ two players (playing on one device with another person)
★ play online (via Game Center game with online play)
Download and play against other players!

Doodle Tic Tac Toe brings to your iOS devices the classic tic-tac-toe game that we all grew up playing.