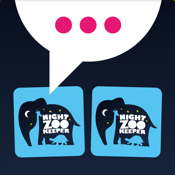 In Night Zookeeper Story Pairs every game is an adventure. Players compete in a game of Pairs, collecting unique magical animals that have been created by children from around the world.

Every animal you collect comes with its own special Story Power. This could be a: plot, setting, object or challenge like using the word ‘cylinder’ or even something funny such as having to talk really slowly!

You see the winner of Pairs takes the spotlight and uses their magical animals and Story Powers to entertain their fellow players by telling a story that has never been heard before.

ROAR!
Don’t worry though because even if you don’t win at Pairs you can still ‘Roar’ to join in the fun by affecting the story with one of your own animal’s Story Power. Additionally, each story will be recorded so you can enjoy it again and again.

Challenge your memory and imagination with Night Zookeeper Story Pairs by downloading the app now.