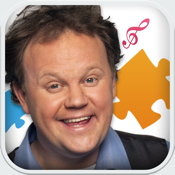 Welcome to Justin's World - Jigsongs!!….Jigsaws with a special musical twist! Complete the puzzle and watch Justin come to life to sing a favourite traditional song, including:

- Videos of Justin singing well known traditional songs
- Different levels of play, to match your child’s ability
- The addition of Justin’s voice over to guide and support your child
- Beautiful illustrations combined with comedy performances from Justin.
- Carefully designed play features to support little fingers.
- As with all Justin’s World Apps, Jigsongs is totally free of any “in-app purchases.”

WHAT’S IN THE APP?

Say hello to Justin as he introduces the fun - and then choose a puzzle piece to select a song.

Decide on Easy, Medium or Difficult play levels, depending on your child’s ability. Watch as the picture puzzle shatters into the relevant number of jigsaw pieces.

Touch each piece to make it expand, and then drag and drop onto the guide picture.

Justin’s voice will help and support your child throughout. On completion, the puzzle will magically come to life.

Your child is rewarded as Justin sings them a favourite traditional song. As always, Justin puts his own comedy spin into each song.

Are you ready to play? Then it’s over to you.

Allan Johnston, BAFTA award-winning creator of Mr. Tumble, teams up again with Justin Fletcher for his first ever series of apps. This is the third release in a series of apps all aimed at getting your child thinking and learning in a supportive, entertaining and educative environment.

If you like Jigsongs please let others know all about it and if you get a moment it would be great if you could share a review on the App Store.

Already Available in the App store:

Justin’s World – Goldilocks.
A charming adaptation of this classic tale, featuring Justin performing all the characters. Your child’s job is to help Goldilocks clean the 3 bears’ cottage and in doing so they’ll be counting, matching and sorting as well as developing their language skills and solving puzzles.

Justin’s World - Lettersounds
This educational app introduces and reinforces little ones understanding of initial letter sounds, as outlined in The Primary National Strategy. We begin with the first 8 letters your child will be learning: s,a,t,p,i,n,m,d.

Animal- Sounds.
A totally free app to say thank you to all our Justin’s World followers . Tap on the animal and watch Justin perform hilarious animal impersonations. Why not see if your child can copy Justin!

For more information and to stay in touch visit: