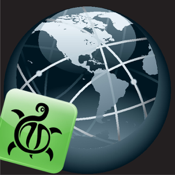 gtGpsRecorder is an App for recording tracks by
continuously recording the GPS-Positions.

The following functions are included:

+ Countinuous display while recording
+ position, speed and distance is displayed in
different units (km, NM, Miles)
+ Compassdisplay
Direction of movement
Orientation of the device
+ Track-View in a Map
As small preview in Main-View
As Fullscreen-View
+ Defining the display of the track, run so far,
center to actual position or to the entire track.

+ Display of single or sampled tracks in a Map-View

+ Converting of the internally used recordingformat
+ Recording as NMEA RMC-Sentences
+ Convert NMEA to KML
Format and content are selectable
Line, Placemarks with speed and heading in
selectable time interval, Count of the positions
is „thinnable“ to create smaller filesizes of
the generated KML-Files
+ Convert NMEA to GPX
Content is selectable, with or without timestamp

Continued use of GPS running in the background can dramatically decrease battery life.