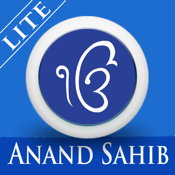 • Each line is highlighted as the paath is recited.

• Mp3 Playback of Paath in the background when you don't want to read the paath.

The Anand Sahib is written in the Ramkali Raag by Guru Amar Das, the third Guru of the Sikhs. This Bani appears on pages 917 to 922 of Guru Granth Sahib ji.

“Anand:” the Blissful Hymn, is the name of the scripture, it also means the spiritual-bliss, and the worldly pleasures as well. It is said that the person who recites this Bani in the morning with dedication, attention, and comprehension will achieve happiness and peace of mind.

Having tasted the Nectar of Divine Bliss upon meeting the Beloved Satguru. Guru Amar Das writes of the Supreme Bliss he experienced, enjoyed, and attained in begetting, finding, and meeting the Holy True Guru.

To a devoted Sikh of the Guru all Dukh (Pain) and all Sukh, (Pleasure) are expected to appear the same. The Sikh enjoys the comforts of the world but does not get lost in the pleasures. Anand pertains to the Bliss of the Atman. It does not diminish in adversity. It is perpetual in all ups and downs of life. This Anand transcends pleasure and pain, joy and sorrow (Pauri 4).

Another important point in the Anand Sahib is that without the Guru’s grace Anand cannot be attained, “All [people] talk of ‘Anand’, but from the Guru’s teaching alone is its essence realized. (Pauri 7) In Anand Sahib Guru Amar Das puts forth the criteria of ideal disciple who deserves Guru’s Grace.

•Then Sikh has to willfully accept the Divine law (hukam) and the devotee is required to surrender his complete self to Guru’s guidance. The self includes body, mind and wealth (tan, man anddhan) (Pauri 9).
•The Sikh is advised to abandon cleverness (chaturai). Guru Amar Das states that stability of mind is not attained with worldly wisdom or intellectual understandings. (Pauri 10)
•The Sikh should not be engrossed in the worldly things which make them forget the real essence of the Supreme Reality. Guru Amar Das states The disciples that human beings get entangled with their families and relatives (kutamb), are perishable. They would not be helpful to them for the attainment of Spiritual Bliss. (Pauri 11)
•The seeker of Anand is prohibited to adopt the way of ritualism. Guru Amar Das categorically says that stability of mind (Sahaj) cannot be realized with the formal rituals. (Pauri 18)
•It is suggested that the devotee should banish the love of the second or the other (duja-bhau). Guru Amar Das writes, ‘those who with the Guru’s Grace get engaged in Him, the Supreme Reality, they achieve realization even while living in maya.’ (Pauri 29)
•To make one’s mind stable, the devotee should always praise the Divine attributes of the Supreme Reality. He is advised to constantly meditate on the Name (Naam) of God. As soon as the devotee’s mind concentrates on one God (Hari), it sheds all the sufferings and pains of life. (Pauri 2)