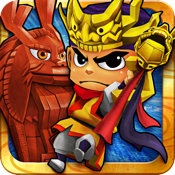 Thank you for playing SummerTimeStudio games.

Many reports have been coming in concerning
apps not working properly on devices running iOS 9.

After investigating the issue, problems have been
discovered with the following operating systems:
a. iOS 9.0
b. iOS 9.0.1
c. iOS 9.0.2


We are currently working on fixing the problem.
Once a schedule for the fix has been established,
we will put out another notice.

The 3rd game brought to you from SummerTimeStudio., your favorite Okinawan game studio.
It is free-to-play, and we have also renewed the game play and levels!

Made for you that simply loves Okinawa. “Okinawa’s Summoner”.
Down the road to the beach, you can see the good old Okinawan views and Shuri Castle.
This is a defense action game, with an Okinawan theme.

A land once known for its rich trade with China, the Ryukyu Kingdom.
One day, demons started an invasion marching in from the ocean.
Your job is to stop them from reaching Shuri Castle.
You will be aided by many friends such as Sango, the goya-plant, dolphins, pork boxers, and even surfing dogs. A part from your Okinawan friends, fairies will also come to help you in battle.
You can use the coins you earn in battle to buy upgrades, skills, and items!
Only you can regain the peace and love of Okinawa!

- Upgrade your friends!
Upgrade your friends to the highest level to unlock their full potential!
- Characters and skills:
Characters and skills are unlocked by clearing stages!
The more you play the more you gain!
Try to unlock all the characters and learn all of the skills!
- Pattern:
Every stage has the same wave no matter how many times you try, memorize the sequence and create a strategy that reflects it when you are having trouble!
- Timing:
Learn the timing and the time gap between appearing monsters to have the best result!
- Skill:
You are invincible while you are using your super-move! Time it well and use it wisely!