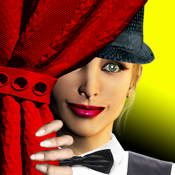 “Before you can be a star onstage, you have to go BackStage!”

You do everything an actor or actress does before the curtains rises. The fantasy and reality of being “BackStage” unite as you sing notes to match pitches, play piano, put on costumes, rehearse dances, answer stage trivia and find your way through mazes, all while trying to avoid the theater phantom...

If you do things wrong: set pieces fall on you, a crazed fan takes you out of the theater or the phantom carries you away in a boat. If you complete your quest, gather your clues and make it to the stage, the curtain rises and “you” are dancing in the show.

I can hear the "half hour call", time to get ready for the show.
"Break-A-Leg!"