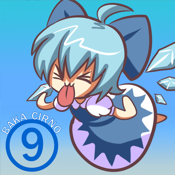 Cirno messed up again!
Playing a joke on Reimu went a bit too far and now she's in trouble! Help Cirno escape and fly away from Reimu's attack. Be sure to avoid running into shrine pillars or you will be hit! As an added bonus, there will sometimes be frog sitting atop of the shrine pillars which you can freeze by touching them which grants you 10 more 9-COIN points!
Fly as far as you can to beat your own score and play against your friends as well to see who can get the highest score!


1 Costume will be unlocked after you pass the following scores:

Once unlocked, at the very first comic page you will see a 6 on the top left corner. Tap on the 6 and it will turn into a 9, which then reveals the costumes you have unlocked.

With these costumes, they also each individually have their own special way of receiving points.