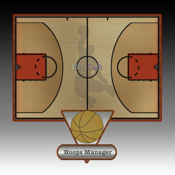 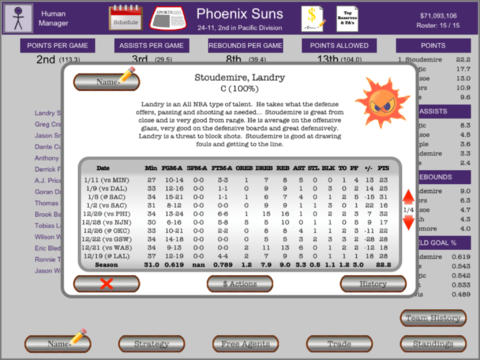 If you ever thought that you could run your favorite basketball team better than 'they can', Hoops Manager is for you. Hoops Manager is a full featured sports simulation for professional american basketball. Take over one of 30 teams and guide them to the championship!

Great potential ****
by Reolurktager - Version - 1.0 - Apr 5, 2014
I think this game has a great layout and easy to understand. I've changed all the team names and player names which did not take too long -thanks to a post on the forum of the production company. So far the AI has been really good. Three team trades are accurate and fun. The only reason I gave it a four star instead of five is because the simulation speed is pretty slow, particularly for games you are not watching or managing. But I recommend it to anybody who likes simulation sports games like iOOTP.

Hoops Manager includes:
- original ratings based on actual player performance
- advanced and standard statistics
- weekly, monthly and yearly awards
- free agency
- career progression and retirement
- salary cap (including Bird rights, etc)
- trades with up to 3 teams and including draft picks
- player level offensive and defensive strategy
- team level offensive and defensive formation and pace
- team depth charts
- power rankings
- draft lottery and draft
- All Star game
- full playoffs
- Training Camp
- News reports covering injuries, financials, top performances and awards
- advanced simulation actually plays the game rather than being generated as a composite of ratings and your coaching and strategy will make a difference
- shot chart for team and players during games
- games can be quick simmed (1-3 seconds per game), coached directly or simply watched, but the same engine is used regardless
- edit player and team names (our forum has user created lists for both the 13-14 and 14-15 seasons to help)