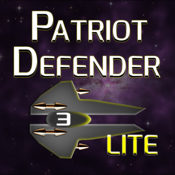 Your mission: defend the earth's satellites against an ever increasing threat.

Join the Patriot Command as you take control of the earth's defenses against the enemy, which include Renegades that will destroy your satellites, Pirates that steal satellites and asteroids that smash into satellites.

Begin your campaign as an Acting Ensign and advance through the ranks as you achieve specific goals for each level.

Features include:
- 2 free levels of non stop shooting action (FULL version has 14 levels)
- a variety of special weapons
- 2 campaign modes (normal/heroic) that can be alternated throughout the game
- statistics that keep track of your progress and sharpshooting skills
- a 2 and 3 point shooting range when hitting targets (just like basketball)
- special bonus targets that enhance your defensive abilities