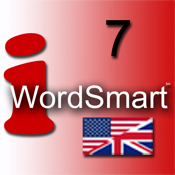 The iWordSmart family of products is unlike anything else in the marketplace. NO IN-APP PURCHASES! The product is completely self contained so no internet connection is needed while playing. It contains all original artwork, an intuitive and unique user interface, and a progression of apps that continually challenges students as they mature and advance. To the benefit of parents, modern technology allows iWordSmart to put a powerful learning tool in the hands of children for a very modest investment.
This iWordSmart product contains more than 160 words, each supported with its own image and audio track. The mixed iWordSmart apps have more than 250 words. The application accommodates up to six Players. Each Player can personalize the application with his or her own name and option settings. The app also simultaneously maintains the progress record of each Player until it is reset by that individual user.

The first time a new user launches the application, the Player will only have the choice of selecting a New Game. After the initial launch of a New Game, it is advised that Players utilize the Existing Game option on the Main Menu when returning to the game until all the words have been mastered. Starting a new game clears the list of mastered words from the Progress Report for that Player.

Upon pressing the New Game button or the Existing Game button, Players are presented with the Game View. Users will be challenged to spell each word after they are presented with an on-screen image and an audio track in which the narrator states the word, followed by a character-by-character spelling (for example, The word is ANT; A-N-T). Each audio track can be repeated as many times as the user finds necessary by pressing the Repeat Audio Track button.

A word is designated as mastered by the iWordSmart application when the Player spells the presented word correctly within the allotted number of character inputs, foregoes the use of the Hint button, and completes the word within 60 seconds. Players are allowed an unlimited number of attempts to spell each word correctly until it is mastered.

During the development and testing of this product line, parents and teachers who used this app were impressed by its elegant yet simple design. Children quickly grasped the user interface and immediately started learning how to spell new words and make word/image associations.

The objective of iWordSmart applications is to educate children with an entertaining game environment while placing them on a fast track to correctly spell words by recognizing their associated spoken name and image. This application can also be utilized by adults who are learning English as a second language.

Thank you for your interest in this iWordSmart product.