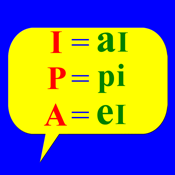 There’s never been a more effective and exciting way to learn the International Phonetic Alphabet than with Interactive IPA, a unique interactive demonstration of phonetics. By allowing you to click on any IPA symbol and instantly hear it and learn more about it, this app will expand your knowledge and comprehension of phonetics.

The app is brought to you, and voiced, by Paul Meier, a theatre professor specializing in voice, speech, accents and dialects, phonetics, heightened text, and Shakespeare; a renowned dialect coach for theatre and film; and a voice-over artist with many commercials and audio books to his credit. This has been his calling for more than 40 years, in his native London, in the United States where he is now based, and all over the world. He holds a first-class Certificate of Proficiency from the International Phonetic Association.

Among many of the famous directors with whom Meier has worked is Oscar winner Ang Lee, who says, “Paul [is] invaluable in maintaining dialect and ensuring clean, clear speech. … He has a great feel for the language, … and Paul’s contribution [to my film] through speech, voice, and dialect was crucial.”

In addition to the official IPA charts, this app presents one extra chart of Meier’s own devising: diphthongs and triphthongs of American and British English. The app is designed by Scott Means, based upon the official charts of the International Phonetics Association and an original interactive design by Eric Armstrong.