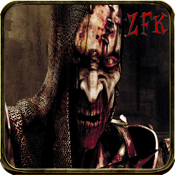 Defend yourself from the looming zombies in this thrilling Dead Zone FPS Shooter game.
A diary, recording a period of history about a miserable and unimaginable world and a legendary person, has been found by generations of humanity.
Human's mission lies on your shoulder.
There are those that think the tide is turning in the war with the undead. Since we first entered the Zombie FPS Shooter, many survivors have been rescued. Many more are still out there, banded together and taking on the Dead Zone Zombies hordes anyway they can. From around the world, scattered reports come in of groups fighting back.
But, until they can find a cure, we are in a daily life-and-death struggle with the Dead Zone Zombies. Everywhere we go, we are heavily outnumbered. The undead Zombies, however, are heavily outgunned.
This war still has a long way to go, despite what anyone says. Can you accept the challenge and fight for the Dead survival of the human race?
We need you.
Dead Zone FPS Shooting is the most fun and challenging game if you are so into about Zombie game...
You are the only survival citizen who can deal with the Dead Zombies which walk around all over the deadly city, kill the endless zombies Zone with your stick, gunshot, or even thunder gun.
Making the most of your limited resource, kill the most of the Dead Zombies, collecting more score.
The game goes on forever, until the zombies finally catch you and snack on your tasty brain.
Dead Zone FPS Shooting game of 2014!!!
Extremely thrilling and grand battle scenes!!!
Mystery brings about attractive combat!!!
Splendid visual effect and blood boiled battle with Dead Zombies!!!
Be a hero. Fight bravely and rescue your compatriots instantly!!!

* Many challenging levels to test your skills.
* A dynamic skill development system allowing you to use your own strategy against the Deadly Zombie armies.
* Fantastic visual and sound effects. Put your headphones on and enter the world of the game!
* Distinctive zombies
* Thrilling battle scenes
* Intense zombie-blasting action shooter gameplay!