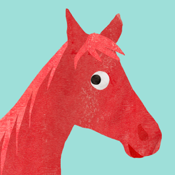 Through storybook, puzzles and an interactive glossary, the app introduces the delightful and curious terms used for animal groups such as: a parliament of owl, a mob of kangaroos and a memory of elephants.

The app capitalizes on childrens’ fascination with creatures great and small, delighting young minds with engaging and wistful animation but also encouraging their developing vocabulary and phonics.

Content:
- A fully animated and narrated storybook
- 12 pages of chunky puzzles
- A visual learning tool that introduces 54 entertaining terms for animal groups, such as “the ostentation of peacocks” and “an unkindness of ravens” (a big hit with the parents!).

"Lars and Friends was shortlisted because of it’s successful combination of storytelling and information, executed in a very elegant, manual technique. Jurors said “the animation and the stylization of the horses is particular noteworthy, providing proof of artistic and academic mastery" - Bologna Ragazzi digital award jurors.

“Best of the extra features is a "Learn" menu that offers many more animal group names, such as an ostentation of peacocks. The app's shining features never overwhelm the simplicity of Lars' story or the nicely executed idea at its heart.” – Kirkusreviews.com

"Some educational apps are rather predictable. Lars and Friends, a new combination story and puzzle app, is anything but predictable. From the opening screen, in which Lars, the red horse, has a knot of frogs perched atop his head, to the end, there are plenty of surprises. This wonderfully creative approach to learning about the animal kingdom makes it a Top Pick at Fun Educational Apps. " -funeducationalapps.com

“Lars and friends is an illustrated delight and an thoughtfully developed educational app.”, “a charming storybook for young children that contains very special illustrations, making it really stand out among a sea of other apps within iTunes.” - 148apps.com

"Lars and Friends is a wonderfully crafted story book that delights on so many levels. The lush and stylized artworks are beautiful to behold. The story is fun and engaging. You’d be doing yourself and your children a favor by downloading this one!" - Hypi.st

"this has been one of my favorite book apps to review in quite some time. It might be that my favorite part would appeal much more to adults or older children than to storybook-aged kids, but it certainly could open up an avenue for parents to share with children how fun words and language can be." -smartappsforkids.com

"Beautiful watercolor illustrations, puzzles, and a short learning activity add to the story of Lars, a horse, as he interacts with his other animal friends." -bestappsforkids.com