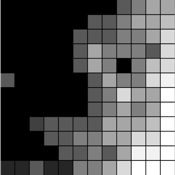 WHAT PEOPLE SAY ABOUT ELIZA'S QUEST

"For those intrigued at the history of chatbots, this might be an interesting guided tour of Wikis and conversational transcripts online, but you might prefer to ask Siri whether there’s anything a bit more involved to delve into." Kaiju Pop

It was 1987 when I met Eliza. She was a MS DOS program that I launched on my own FidoNet Bulletin Board System. I configured her dictionary so that she appeared to be more human and with personality. As a system operator, I enjoyed watching people chatting with Eliza.

After 27 years, probably it was due to some complex, I thought about Eliza. I got an open source of Eliza, did some research about the chatbot history, and created a tiny, nano novel about Eliza. I created this game on iOS, preserving the look and feel of the keyboard in 1987.

You may not like this game, as Eliza is not getting more clever than before. Eliza is the same Eliza in 1987, except that there is a story behind. And this is something I want to tell you.

Therefore, you are not spending money on a game. You are spending 1.99 cents on a tiny novel, and I hope you get some fun of it, and enjoy the guessing process.

Eliza, a famous chatbot psychotherapist, has depression for many years.

You were invited by Dr. Iris B., the chairman of Tobor Therapy Association, to be involved in Eliza's therapy process by pretending to be her patient.

This morning, you received a letter from Iris, informing you that your second appointment with Eliza is confirmed.

You will find out more of Eliza's story, by talking to her in the right way, and asking her the right questions.

You have her file ready, and your conversation is about to start…

Eliza in this game talks in the same manner as Eliza in 1966, so she is not more advanced than she was 48 years ago.