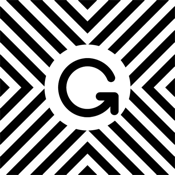 The term GIF-ITI was coined by artist INSA when he started creating his unique animated paintings; street art that paradoxically is only viewable online. Playing with the idea of creating art to be viewed in the hyperreal domain, GIF-ITI is made via a laborious physical process involving numerous layers of painting and meticulous planning. Starting where most artwork ends, GIF-ITI entails photographing each layer the artist paints by hand. These images are then uploaded and overlaid to create the final piece, a looping GIF file which comes to life when released to global audiences online. Described as: "...slices of infinite un-reality, cutting edge art for the tumblr generation."

Now this GIF-ITI app enables audiences the chance to experience the GIF-ITI in real life!!

British artist INSA began his career as a graffiti writer. Known worldwide for his trademark 'graffiti fetish' pattern, painted as large-scale murals around the world, this signature design now envelopes bespoke furniture, the artist's own line of high heels, as well as custom cars, yacht sails, and private collector's homes. INSA's work is held in the V&A collection, London. He has exhibited at Tate Britain, London, as well as in galleries of major cities including; Tokyo, LA, New York, San Francisco, Hong Kong, Berlin, and Montreal.
He lives and works in London, UK.