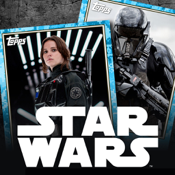 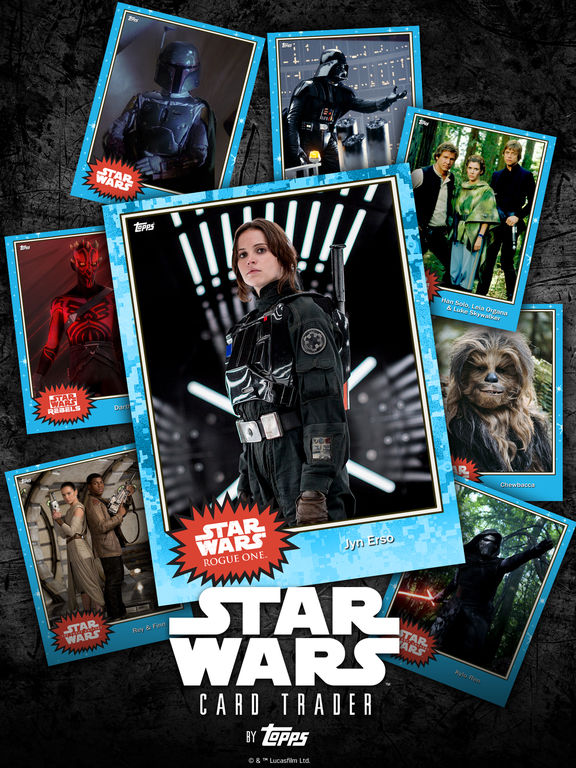 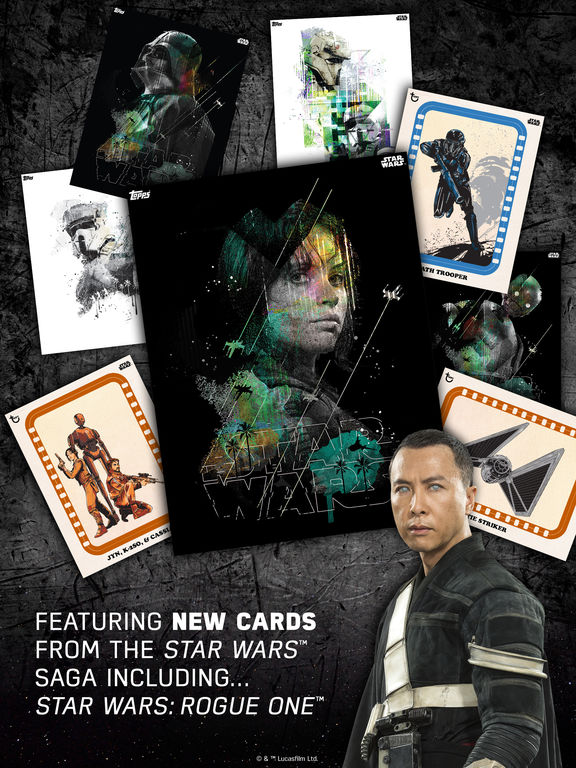 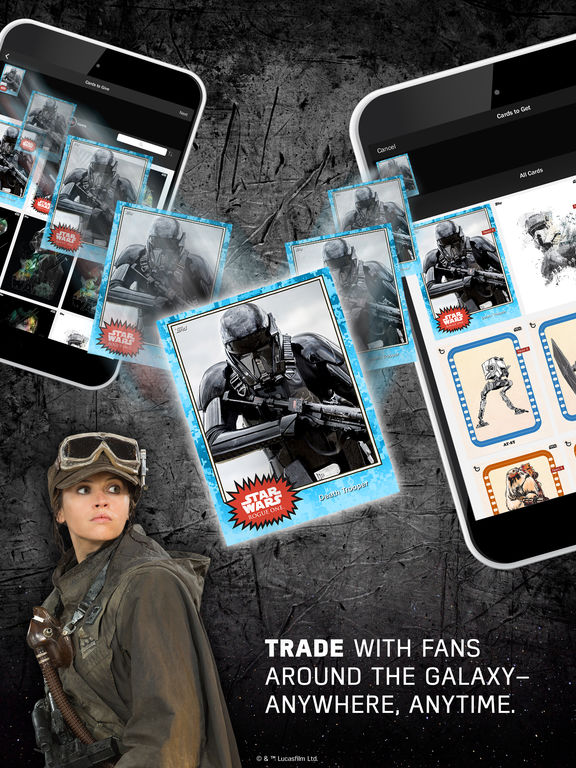 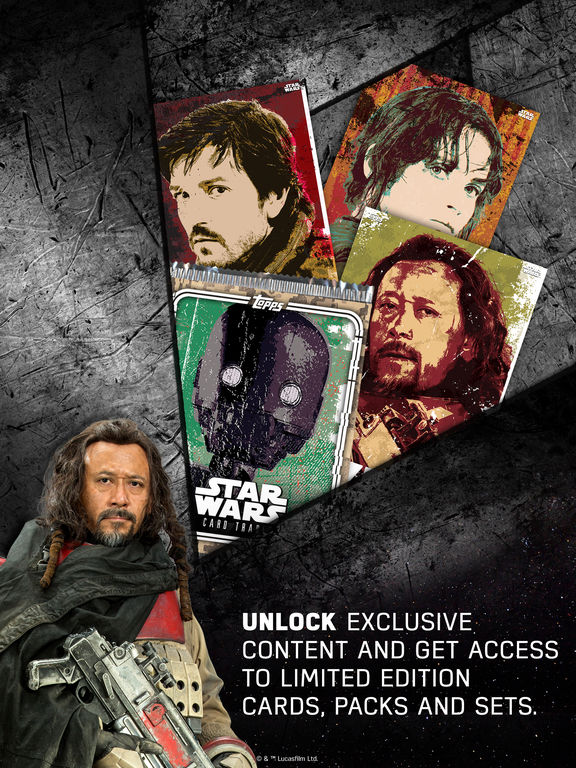 These are the cards you’re looking for… Relive all the galactic adventures of almost 40 years of Star Wars with the first ever Star Wars digital trading card experience!

From the rise of the Dark Lord of the Sith, Darth Vader and the adventures of Jedi Knight Luke Skywalker, all the way to the epic battle between Rey, Finn, BB-8 and Kylo Ren in Star Wars: The Force Awakens™, this is your ultimate Star Wars fix.

COLLECT AND TRADE THOUSANDS OF STAR WARS CARDS!
• Thousands of packs of officially licensed digital cards from Star Wars, The Empire Strikes Back, Return of the Jedi, The Phantom Menace, Attack of the Clones, Revenge of the Sith, Star Wars: The Clone Wars™, Star Wars Rebels™, Star Wars: Rogue One™ and more!
• Nearly 200 different art styles from exclusive series to collect. Want a minimalist Boba Fett illustration? What about a Droids rock band poster? Or Han Solo Graffiti art? Empire or Rebels, it’s all here.
• Hundreds of Star Wars movie series characters like Jyn Erso, K-2SO, Director Krennic, Rey and Kylo Ren, plus droids, vehicles and locations
• Trade your cards like a Jawa with fans from around the world!
• Rebel or Empire? Resistance or the First Order? Join the best online community of digital card collectors in the world! The 24/7 Fan Feed allows you to propose trades and chat online about all things Star Wars so you can feel the power of the Force!
• Collect or trade your favorite movie characters! There are bounty hunters like Boba Fett, brave droids like BB-8, valiant Galactic Republic knights like Jedi Master Yoda or evil Galactic Empire forces like Dark Lord of the Sith Darth Vader…

OPEN PACKS EVERY DAY FOR FREE!
• Play like a Jedi and trade with fans from around the world!
• New cards and series’ released every day! (Yes, you read that right. Every day.)
• Sign up to get Free credits every day to open up to 5 free packs of cards each day! (Yes, again, you read that right.)
• The most dynamic card store in the galaxy! New series, artworks, and editions of cards released daily!
• Feel the thrill of opening packs of cards – decisions over choosing the right pack, all those glossy decks, the anticipation of what it might contain, the victory of pulling the card you want!
• Relive the epic struggle between the Sith and the Jedi and play this epic app online with all your friends.

Collect and trade over 1,000 officially-licensed Star Wars digital cards. Collect all of your classic characters like Luke Skywalker, Princess Leia, Han Solo and R2 D2 to the new heroes of The Force Awakens, Rey, Finn, Poe and his faithful droid BB-8. And now available Jyn Erso, K-2SO, Director Krennic and Cassian Andor. From the nostalgia of the original movies, including replicas of the original “Star Wars ‘77” set by Topps, to the futuristic with all new trading cards with exciting digital twists. Take your entire Star Wars card collection with you and play online, anywhere you go.

FROM 1977 TO STAR WARS: ROGUE ONE™, HERE ARE THE CARDS YOU ARE LOOKING FOR!
• Dozens of new designs featuring Jyn Erso, K-2SO, Director Krennic, Cassian Andor, BB-8, Rey, Finn, Poe, Kylo Ren, Captain Phasma, and more...
• Re-releases of original vintage movie cards! Complete the original 70’s, 80’s and 90’s decks that you didn’t finish or weren’t born yet for!