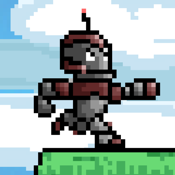 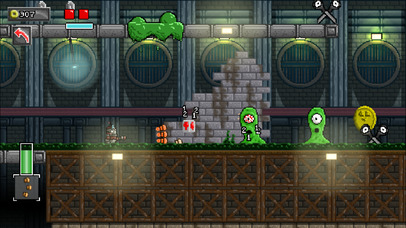 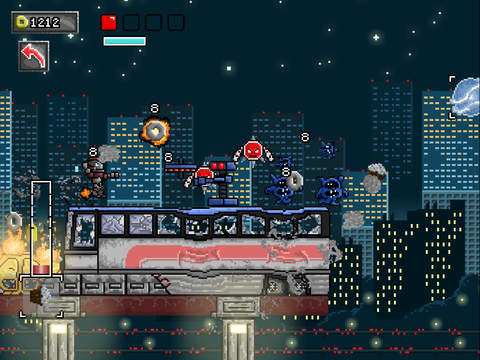 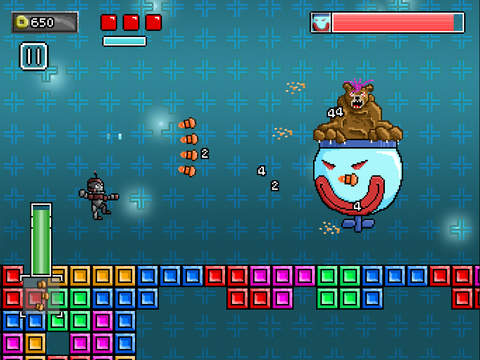 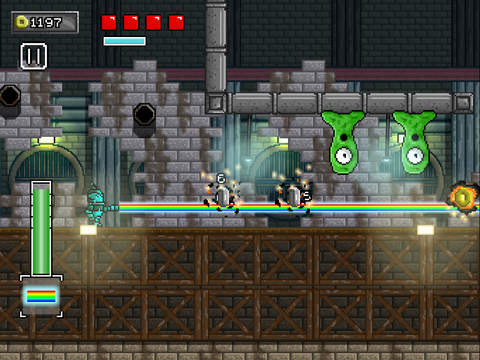 Professor Pillbody has invented a robot and an arsenal of baked goods designed to rid the world of sadness. As Buddy Bot, jump and shoot your way through 36 exciting levels as you destroy all the purveyors of sadness: bad haircuts, automotive traffic, computer viruses, adorable children's toys and more! Unleash a barrage of donuts, cupcakes and other tasty treats onto your enemies. Collect coins and unlock new weapons and upgrades. Discover warps and secret paths. Perform sequences of jumps all while firing your weapons. And never play a level the same way twice, as you fight to make the world a better place.

NO IN APP PURCHASES!
You pay for the game once, you get all the content!

No virtual d-pad here! Just tap on the screen to jump, or warp yourself by tapping on a blue Energy Orb. Intuitive level design that will make you feel like you're playing on a game pad, when all you're doing is controlling Buddy Bot's triple jump ability. Tap an icon to bring up the weapon select menu, but don't worry, Buddy Bot will take care of the running and shooting himself!

36 levels spread across 6 different game worlds including one bonus world. Each world has it's own distinct style and enemies plus 5 challenging bosses.

Weapons can be earned and upgraded between levels. Each of the first five worlds will unlock new weapons, as well as new upgrades for older weapons as the player progresses through the story.

Unlock the 6th world after you've completed the main story and collected enough Happy Coins on each of the first 5 worlds. There are 3 hidden Happy Coins per level, some of which will require significant skill to acquire!

Buddy Bot app review: ensure sadness doesn't exist. Here's a robot that has a very special and unusual task assigned to him and he needs your help. The Buddy Bot app can be played on your iPod touch, iPad, and iPhone and will have you helping Buddy Bot to rid the world of all the sad...

The mission for this game is to destroy all the sadness throughout 36 levels. To accomplish this mission, you must use your arsenal of baked goods to destroy the sadness. It's an all around sweet concept. Who wouldn't want to cure the world of sadness with donuts and cupcakes? The game has a retro l...