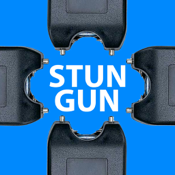 Electric Stun Gun Simulator lets you use your iPhone to simulate an actual stun gun device. Scare your friends, use it to fend off potential robbers, and just find out ways to have fun with it.


If you feel inclined to upgrade the app, you will have access to multiple different stun gun sounds, vibration, ad removal, and multiple color changes for the electricity. Also, you will be able to "flip" the orientation of the device, so that the speaker is facing out. This will help ward off attackers in a parking garage.

If you feel like just having fun with some electric stun gun sights and sounds, this is the app for you. You can scare your friends or keep potential attackers at bay.

Enjoy and have fun!

For some additional information, here are some stun gun facts:

1. Stun guns are hand-held electronic device that produces a high-voltage pulse that can immobilize a person for several minutes with no permanent damage in most cases.

2. Stun guns are powered by ordinary batteries, which supply power to a circuit containing transformers, oscillators, capacitors, and electrodes. In some versions the electrodes are connected to the gun by wires and may be shot at a person.

3. The transformers with the stun gun increase the voltage in the circuit to between 20,000 and 150,000 V and reduce the current proportionally.

4. The stun guns oscillators fluctuate the current to produce a specific pulse frequency, and the current charges the capacitors. Connecting the electrodes to a person's body releases high-voltage electrical energy at a frequency pattern designed to interfere with the neurological impulses that travel through the human body to control voluntary muscle movement.

5. The use of stun guns has been associated with death in some cases, typically when the person on whom the gun was used on has taken drugs or has a pre-existing heart condition; the use of device multiple times also appears to be a factor.

6. The degree to which the stun gun may have contributed to the deaths is unclear, but studies with pigs have shown that repeated shocks can cause heart stress and a test of some of the devices showed that a few delivered more current than expected.