Apple's iPad and iPhone devices have so many games available for them, you probably won't know where to start. There are a lot of famous games out there that have received millions of downloads and if you are an avid gamer, you probably already have some of these apps. However, there are more than likely a few that you are missing out on too so here are a few cool iPad apps for gamers.   #1 - Angry Birds HD Ok, so we couldn't write this article without mentioning this application. Originally released for the iPhone device, this app has taken the world by storm and we are sure that many of you will already have played the iPhone version. Now, there is a version specifically for the iPad named Angry Birds HD. It has got some great reviews in the iTunes app store and we are sure many of you will be able to see why. This game is extremely addictive and the app looks tremendous on the iPad's stunning display. If you are unsure what you do in this game; then basically, you have to fire "angry" birds at a pile of wooden blocks in order to kill the pigs. Simple, but fun. This game is available for £1.99 from the iTunes app store and is a must-have for any avid-gamer! Get it here:   #2 - Fifa 12 for iPad Fifa has released a number of games for popular consoles over the years, although up until now, it has mainly the Playstation console that has seen these releases. However, the iPad has now seen its own Fifa game with the release of Fifa 12 for the iPad. To put it simply, this game is absolutely stunning and is a must -have for anyone that is into football games. The graphics are amazing on the iPad's high resolution display and you can even paid up your iPhone device in order to play the game multiplayer. Not only this, but the game actually works extremely well on the iPad and the controls are very simple to use. This app is just £5.99 which might sound a lot, but when you get the game, you will realise that every penny was well spent. Get it here:     #3 - Modern Combat 3: Fallen Nation Ok, so this app is yet again, stunning. Every serious gamer needs this app, especially if shooting games are your thing. This game actually has a 13 million campaign that will see you travel from Los Angeles to Pakistan and during this time, you are going to experience some seriously good iPad graphics. The multiplayer on this game is what brings it to life though, as you can play with up to 11 other players at once and across a total of 6 different maps. This game costs £4.99 but once again, is well worth it. Get it here:   Reprinted courtesy of www.Apppicker.com 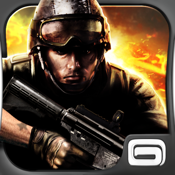