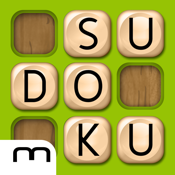 Sudoku Supreme Price: Free For: iPhone 3GS, iPhone 4, iPhone 4S, iPod touch (3rd generation), iPod touch (4th generation) and iPad. Requires iOS 4.2 or later Sudoku has to be one of the most addictive puzzle games of the modern age. Before the advent of iOS devices, you could find these games only in newspapers and puzzle books. Now, the Sudoku puzzle has made its way to iOS devices in a unique way in the form of the Sudoku Supreme app. For a start, the design of the Sudoku Supreme app is great. It certainly looks better than the black and white Sudoku puzzles that you see in the newspaper or puzzle books. Another great feature is the sheer number of puzzles available to play: there are over 600! This game is sure to keep you entertained for a number of hours.

There are three different difficulty modes from which you can choose. This ensures that the app is perfect for people of all skill levels when it comes to Sudoku.  Other features include a save game function, a way of checking whether you have done the puzzle correctly, and an undo/hint button. The Sudoku Supreme app has also recently been updated to include more game designs so you can pick and choose depending on your mood. There are different game modes in this app including the 4x4 option, 6x6 and 9x9 puzzles. Sudoku Supreme is perfect for any Sudoku fan and the best part is that the game is free from ads. Get it for free from the iTunes App Store.