Kill The Pillow app review: declare war on a pillow

There are all kinds of games out there some with some rather hilarious premises much like this next app. The Kill The Pillow app can be played on your iPod touch, iPad, and iPhone and will have you declaring war on a rather unlikely target: a pillow. Okay we have officially seen it all now! The idea of launching war on a pillow may seem pretty hilarious but the fact of the matter is that it’s actually a really fun and challenging game to play.

It's time to literally kill the pillow. You'll be trying to activate switches in order to kill the pillow as you throw balls as the switches. The game uses realistic physics, which makes it much smoother and easier. As you work your way through the different levels you will find they differ in their challenge level. Each level actually has its own gravity and the way the gravity is will affect how the balls react as you shoot them. It feels like you are constantly on a learning curve but a fun and addictive one.

What is great about the Kill The Pillow app is that it can be played by adults and kids over the age of nine. There is currently no customer rating for the app but there are customer comments. As you read through the comments you'll find that players are loving the unexpected target, the smooth gameplay, and how challenging it can be. It’s one of those apps that are deceiving because you launch it and don’t really think it’s going to be that exciting, but then you start playing and pretty much instantly change your mind.

The app feels a bit underwhelming

Launch the games app and the first thing you may notice is that the graphics/animations are a little less than impressive. I do think some more attention could be paid here, even when it comes to the sound effects and music. On the other hand, some may like the sheer simplicity of them. I also found the instructions to be a bit too bare-bones; I would have liked to have seen a demo maybe or just a more in-depth description of how to use the controls.

There aren’t many options here: you can turn the music and sound effects on and off and that’s about it. Personally I prefer to turn them off because I find them to be distracting.

Just a couple of features and options 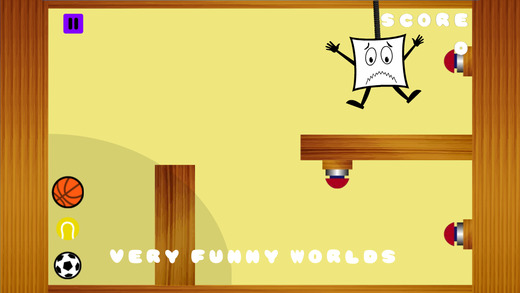 The Kill The Pillow app can be used on your iPod touch, iPad, and iPhone and definitely has a unique concept but I feel as though it could have used a bit more refining and polishing.