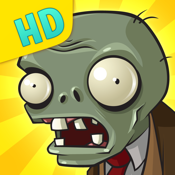 Plants vs. Zombies HD Price: $0.99 For: iPad with iOS 3.2 or later Plants vs. Zombies HD by PopCap is from the same people who developed Zuma, Bookworm, Bejeweled, and Peggle. In the game, a horde of zombies are about to invade your home and you have to defend it with plants. The app has 50 levels in the Adventure mode, plus a super-hard Survival mode and Mini-Games too. You also have the option to just chill out in the Zen Garden and start a plant collection. The Mini-Games include Zombiquarium, Beghouled Twist, Slot Machine, Portal Combat, and Buttered Popcorn. There are 26 kinds of zombies in the game: bucketheads, pole-vaulters, and snorkelers, among others. Each type has its own abilities and skill, so you’ll need to plant according to their weaknesses. These zombies are not stupid, so you have to be super-smart too. Don’t waste your seeds and greens. You’ll also have to deal with obstacles like a swimming pool, setting sun, and creeping fog to blight your progress. The longer you fight, the stronger you get. You can collect coins to buy power-ups, a pet snail, and other items that will help you with your goals. You can also buy coins within the app, along with other in-app purchases. Plants vs Zombies was updated to Version 1.9.5 on September 6, 2012. The update added Retina support. The game is rated for kids nine and up, and is available in English, French, German, Italian, and Spanish. The app has 10,1930 overall ratings with five out of five stars. The current version has 4901 ratings with five out of five stars. Customer feedback is positive when it comes to gameplay but there are some complaints that the app is not fully Retina.