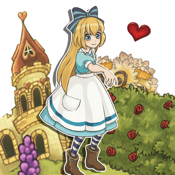 New Alice's Mad Tea Party is a fun game for the iPad and iPhone. I had initially thought it was an interactive story book, but after downloading and playing it, quickly discovered that it's a full game!

If your child enjoys make-believe then the first step is to read them the book Alice in Wonderland. The second step is to show them New Alice's Mad Tea Party so that they can actually play a game as Alice! There is a lot of reading as she talks to the Cheshire Cat, the Caterpillar, and other characters, accepts quests, and journeys through Wonderland to save her pet cat Dinah, but it is a fun game that includes quests, growing items, clearing bush, and more.

What I really liked was how easily the conversation flowed. Sometimes you'll be playing a game and the conversation just doesn't seem like what the character would say, but this isn't the case here. I also liked that the Queen of Hearts has her cat. It makes finding him easy, but also difficult. You know where you have to get, but have to jump through all the loop holes to get there first. 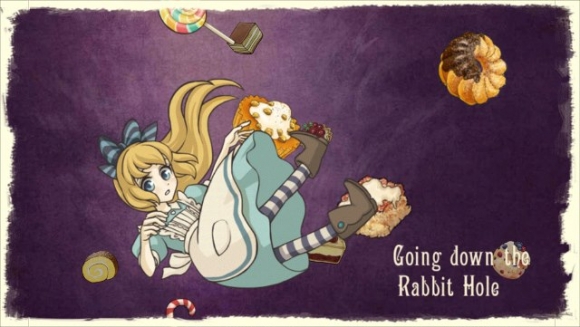 New Alice's Mad Tea Party is a fun game to play, but there are some snags. For example, I immediately noticed that there are some spacing problems in the word bubbles. When you are reading there are several times that a few letters of the word are on the next line without a hyphen. I would think that this would be easy enough to fix in the code, so hopefully in the future updates they'll fix this.

Another issue is that in contemporary society, Dinah is a woman's name, but the cat is male. In the original books Dinah is a girl, but this is really a minor technicality. It did lead to my daughter asking why the cat had a girl name if he is boy, but I just told her that moms and dads name their kids however they want, and given the multicultural basis of her school, that was accepted and on we went. 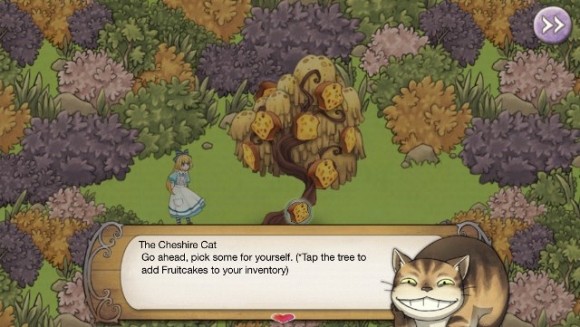 Talking to the Cheshire Cat 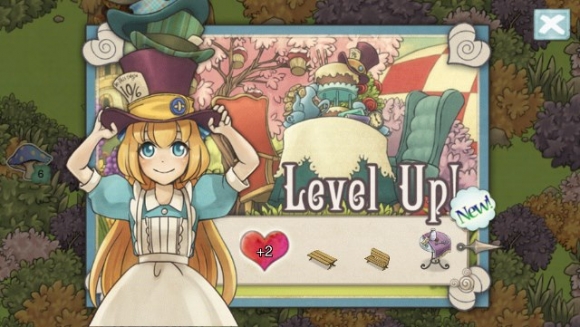 New Alice's Mad Tea Party is a great iPad and iPhone game for kids to further explore their imaginative play after reading Alice in Wonderland. If they have not read the story, I would encourage parents to help them with this if they cannot yet do so independently. It is great to know the back story before playing, but they won't be completely lost if they haven't either. Overall, this is a great game with lots of fun to be had and I would recommend it to any child six and up who has moderate reading skills or has a parent to engage and help with the reading.