If you're the kind of person who enjoys a good joke, or you are looking to expand your library of jokes so you may entertain others at your next dinner party, JOKES. is an app for the iPhone and iPad that you must definitely check out.

What we have here is a collection of tens of thousands of jokes, each truly hilarious, and catering to all kinds of people, no matter what their sense of humor may be like.

This app is available for free from the Reference section of the App Store, so let's take a look at its features.

JOKES. is an ad-supported app, which I personally don't find too intrusive, especially since they only take up a small part of the screen. If you are not connected to the Internet via 3G or WiFi, this app won't even display those ads! This is a self-contained app, so it's entirely possible to have a completely ad-free experience should you find the ads too intrusive.

Upon launching the app, you'll be taken straight to a random joke. Swipe down to scroll through the joke text, or swipe left or right to get a new joke. The interface is divided into four categories including Jokes, Categories, Favorites, and Search. The launch screen is the Jokes section where you can save any joke you want to your own Favorites section for easy retrieval. 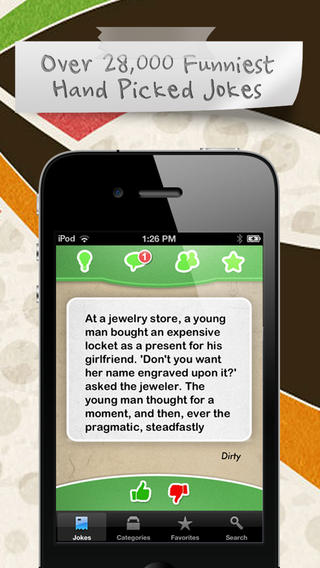 Tens of thousands of jokes!

Unlike other jokes app, I must commend JOKES. on its content. The jokes are absolutely hilarious and there are more then 28,000 of them, which will provide you with hours and hours worth of entertainment.

To help you find jokes easily, you can use the powerful search function which sifts through the entire text of the app, or you can go to the Categories section, where jokes are divided into 25 different categories.

Unfortunately, it appears there are some stability issues with this app, which makes the app crash randomly, so you'll lose the joke you were reading if you were in the middle of one. It's a testament to the content in this app that I've gone back and searched for the joke which I was reading when the app crashed! Other users confirm this is a recurring issue, and it's a bit of a downer for such a great app! 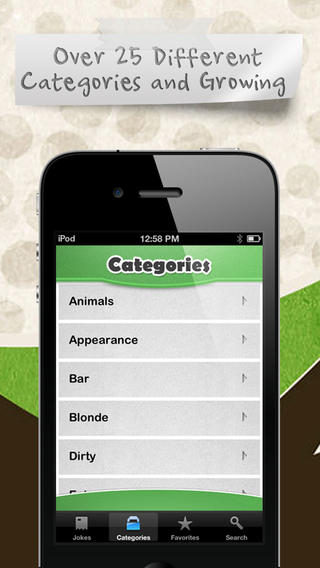 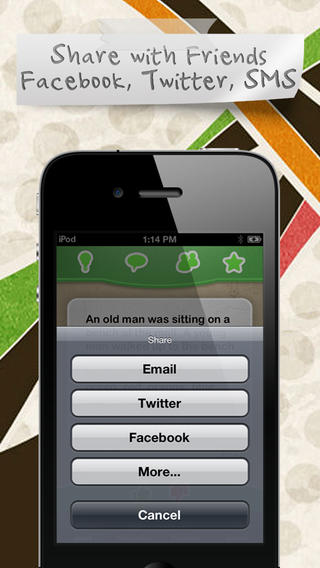 JOKES. is the kind of app that I'd encourage everyone to get on their iPhone or iPad. It's free, lightweight, self-contained, and packed with great content! I hope the developers look into the issue with the crashes and fix it in a future version.