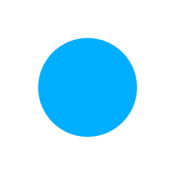 Circle the Dot app review: a fun game that will have you trying again and again

Circle the Dot is a capture the flag type game for iPhone and iPod. All you have to do is surround the blue dot, but this is much easier said than done!

If you want to win Circle the Dot, then you will have to capture the blue dot. Just when you think you’re going to capture the tricky little thing, it changes path and off it goes. Next you’re waiting for it to dodge left, and off to the right it goes. As you tap the gray dots to turn them orange, the orange dots will block in the blue. If it gets off of the gray field though, then you’ve lost the game and the dot escapes.

There are several games similar to this one that use a frog, or a spider, or some other animal, and they’re all quite difficult to beat. I have yet to win a round, but it doesn’t keep me from trying! The gray, blue and orange makes the field and player easy to see, as they are nice and clear. I appreciate this to because it simplifies the visual clutter too. 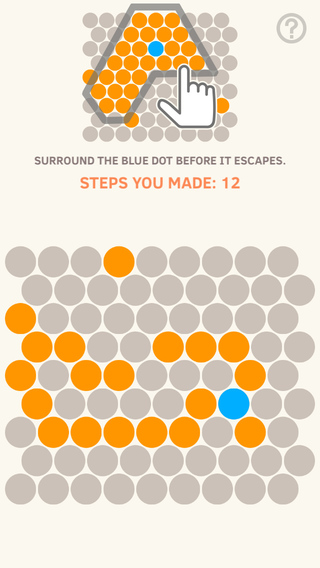 Step count as you play

The best way to play Circle the Dot is with some strategy. I have tried circling in spirals, but the last gray dot to turn orange was always the escape route. I’ve tried turning the outer rim orange, but it was always too big to get done before the blue dot got there. Whatever strategy you choose, just know that you can trap that tricky dot if you stick to it!

I only got this app to open once on my iPhone 5C. It doesn’t seem to like my device. After that, I couldn’t get it to reopen regardless of installing, reinstalling, deleting, restarting, and so on. I tried all the tricks, and no good. If you have a 5C then maybe this isn’t the game for you. 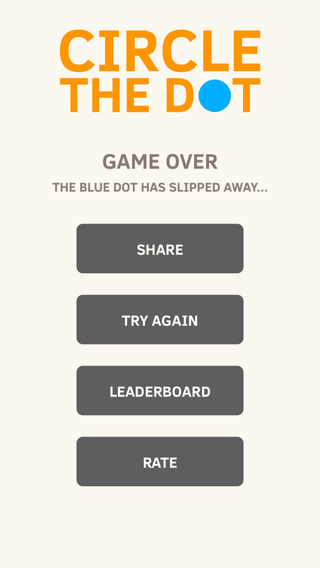 Game Over screen with sharing options 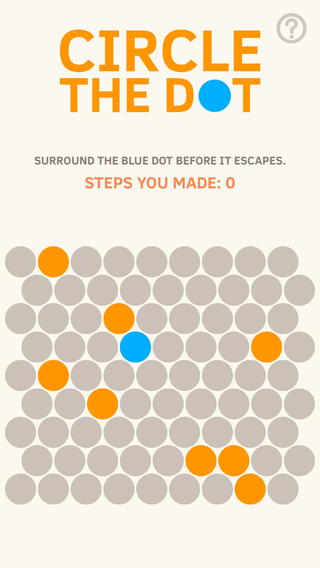 Next round counting your steps

Circle the Dot is an iPhone and iPad strategy game that has simple enough rules and gameplay, but is challenging to actually win. The dot escapes at the last second each time I tried to catch the dot, but that’s part of the fun. If I’d been able to get the app to open again, I’d have played until I won. As far as the app goes, it was difficult to review given the glitch, but I like the easy view screen and simple rules, so overall I’d recommend it with the warning of the glitch.