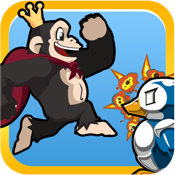 Kiba & Kumba Jungle Chaos is a fun little-side scroller, available for free in the App Store. If you’re a fan of the classic Mario-style games it’s probably worth giving this one a try. Get ready for an action-packed run through the jungle. This app is available for the iPhone, iPad, and iPod touch.

Side-scrolling games are extremely popular in the App Store. How does Jungle Chaos stand up against the competition? I’d say it’s about average. Like most other game in its category the object is to continue moving from left to right avoiding obstacles and jumping over pits as you go. The main difference here is that you collect bananas instead of coins, although there is the occasional coin thrown in for good measure.

The graphics are certainly cute, but they’re not anything special. You can choose between two different characters – either Kiba or Kumba. Once you’ve selected a character you then have to navigate your cute little ape through a jungle setting full of obstacles and enemies. Before you can start your level you’ll have to close an add screen each time you play a different level. This is a little inconvenient, but nothing too annoying. This app won’t take up a lot of space, coming in at 14.8 MB. 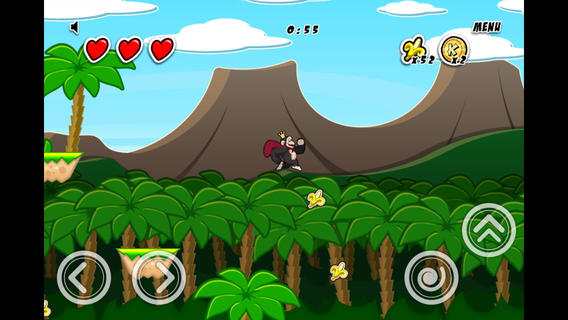 The actual game controls are pretty simple, and standard for this type of game. There are left and right arrows you tap to move your character back and forth, as well as a button you can tap to jump, and one you can use to roll into obstacles. If you’ve played any side-scrollers you won’t have any trouble figuring out these controls. My main criticism with this game is the way the controls work. They’re a little awkward to use, and they don’t always react the way you’d expect them to.

The goal is to collect as many bananas as possible while trying to stay alive. You can lose your life in three ways, either by jumping off a cliff and landing on spikes, jumping into a cavern, or by running into a robot penguin one too many times. You have three hearts, and each time you run into a robot you lose a heart. Once all three hearts are used up you lose your life and have to start over.

Once you complete the level you can select another level to try, or replay the same level. There are four different worlds, each with three levels. However, only the first level on each world is unlocked. You have to complete each unlocked level to unlock the next level on each world.  It won’t take you long to complete this game as there are only 12 levels in total, and they simply aren’t that difficult. It’s okay if you’re looking for something new to try, but if you really like a challenge you’re probably best to look elsewhere. 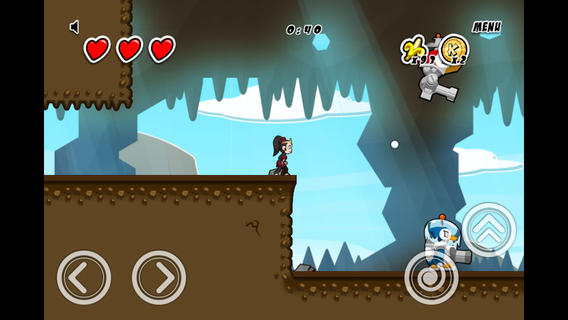 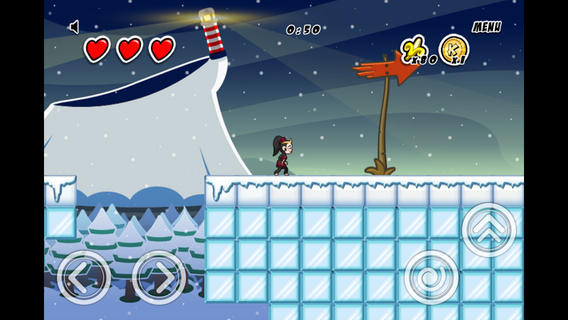 Kiba & Kumba Jungle Chaos is a fun little game, but it doesn’t really stand out from the crowd. It’s not the most difficult to complete, and it probably won’t leave a lasting impression so if you’re looking to kill a little time though it’s probably worth a look.