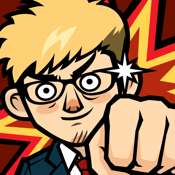 Office Rumble app review: get rid of that pent up anger at work

How may people out there are harboring pent-up anger towards their boss? Probably a huge number. Here's a chance to let that anger out in a virtual sense with the Office Rumble app for your iPod touch, iPad, and iPhone. In this game you get to actually rumble with your boss and the others in the office that you really don't like. The developers call this brand-new game stress relieving, which can certainly be true, but it's also a whole lot of fun to play.

Let Your Frustrations Out

It's time to let all your work-related frustrations out through this fun offering called Office Rumble. In this game you'll be taking part in some rather intense and fast-paced combat taking place in the office. The style of the game is three on three combat fighting. You'll be able to make use of a variety of lethal skills, blocks, and launch attacks. This is definitely not your average day at the office. The game itself is easy to play because the app uses touchscreen controls. These are really quick to pick up on and they are extremely responsive as you use them.

This game is free to play and as a great bonus there are free updates that will happen each month. Because it's brand new there hasn't been an update yet but users won't have to wait long by the sounds of it. These updates will include more stores, new stages, and even additional characters. The app has four out of five stars from users who call it very addictive. 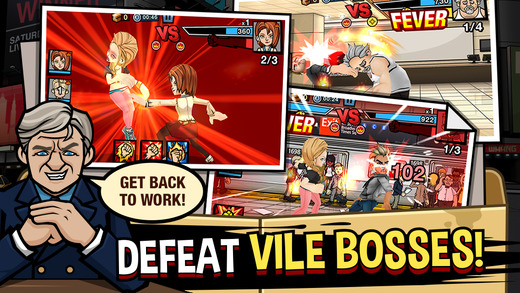 Battles are crazy, fun, and intense

Step Into the Office

Now it's time to step into the office and take part in some really fun and intense action in the Office Rumble app. The app features cartoon graphics, which are fun of course but also add to the intensity. Now of course you'll be able to rumble in the office but as an unexpected surprise you can take these battles out of the office to places like Times Square, the subway, a local bar, the beach, and more. You just never know where you'll be able to engage in a rumble match!

The app allows you to compete with other players from around the world, it supports Game Center and the Leaderboard, and you can collect items as you go that will help you in your battles. If you're playing against other people you can choose between three on three battles or five on five battles. 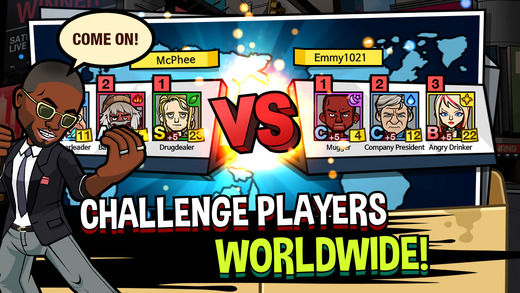 Play against other players from around the world 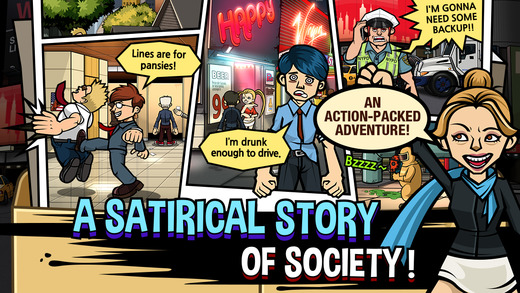 The Office Rumble app for your iPod touch, iPad, and iPhone throws you into some rather intense battles that play out through the use of professional looking cartoon-graphics and simple touchscreen controls.