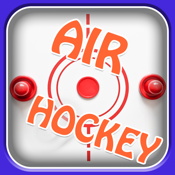 There’s a lot of competition in the air hockey category of games in the App Store these days. Air Hockey 3D Free Touch Action Strategy Board Game is one of the players in this category, and they’ve created an app that has a realistic air hockey experience. If you like simulation games that offer a touch of realism, then this one may just be worth the download. The same can’t be said for all apps in this category so that’s certainly refreshing. It’s one of the best free family board games apps and it’s available for iPhone, iPad, and iPod touch.

If you’ve ever played air hockey in an arcade as a kid then you’ll know how to use this app. The only difference is that you use your finger to flick the puck not a paddle. It’s certainly simple enough, but I did find some glitches in the play every once in a while. The puck has a tendency to jump across the screen on occasion. This doesn’t happen a lot, but often enough to be a little irritating. Beyond that it looks and feels like a regular air hockey table.

There are a couple of serious drawbacks with this particular air hockey game though. First of all you can’t play against another human opponent, the only option you have is to play against the computer. I found this a little disappointing, especially since many other air hockey apps do offer this option. There are three different degrees of difficulty though: easy, medium, and hard.

What I found most annoying about this game was the popups. You can’t escape them. As soon as you hit play you are hit with an advertisement that has to be closed before you can continue, and the same thing happens when you finish your game. In fact the same thing happens whenever you tap any options within the game. It’s common for free apps to contain advertising, but this level of advertising makes you want to move on to the next app. 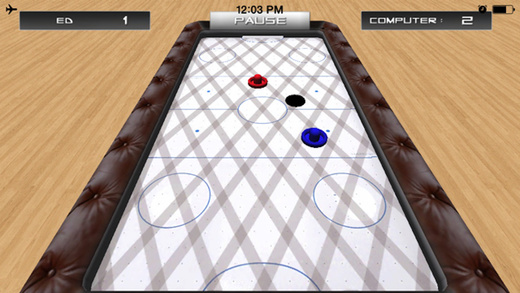 Once you can get by the ads, the actual game play is really quite good. The movement of the puck on the playing surface and off the boards is very close to a real air hockey game. The puck even flew off the side on a couple of occasions, just like in a real air hockey game. As mentioned above, there are three different difficulty levels and they do get progressively harder. The easy level is definitely beatable, but it’s still a little challenging at first. The medium level is quite difficult, and the hard mode will have you slapping the table in frustration.

Another cool feature of this particular app is the ability to change your playing surface. There are about 10 different combinations you can choose from. It doesn’t really add to the actual game play, but it’s a cool feature none the less. 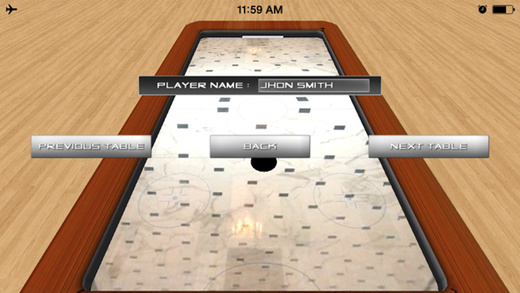 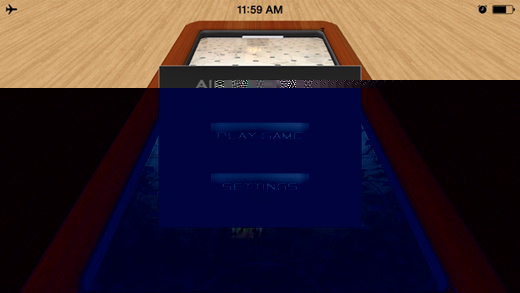 Air Hockey 3D Free Touch Action Strategy Board Game does a good job of recreating a realistic air hockey experience. Unfortunately it is so full of ads that it’s hard to really enjoy the game. It probably depends on how much patience you have for advertising as to whether or not you should bother with this one. Myself, I found it a little much.