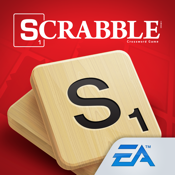 The most favorite and beloved word game just got better with the introduction of Scrabble app for iOS. This digital version retains all the core features and objectives of the original classic board game. However, the app has added more functionality to make the game more interesting for the tech savvy generation. Developed and distributed by Electronic Arts, this app is compatible with the iPhone, iPad, and iPod Touch.

The Classic Word Game in a New Platform

Everyone knows how to play Scrabble. It's one of the classic board games that refuses to fade into obscurity. Grandparents, young professionals, teenagers, and even school children still enjoy playing the game.

The app offers the same exciting gameplay of the original classic version. You can compete with friends by forming words using your seven tiles. The object is still the same: to get the highest score at the end of each game.

But, the electronic version of Scrabble is better. By downloading the app to your mobile device, you will be able to bring the game anywhere and play it anytime you want. You can also enjoy the game in a single player mode because this application allows you to compete against the computer.

Most important of all, Scrabble app is now integrated with the cloud. This means you can play the game in a virtual setting against anyone across the globe. And if you have a Facebook account, you can play a game against your friends and chat with them at the same time. 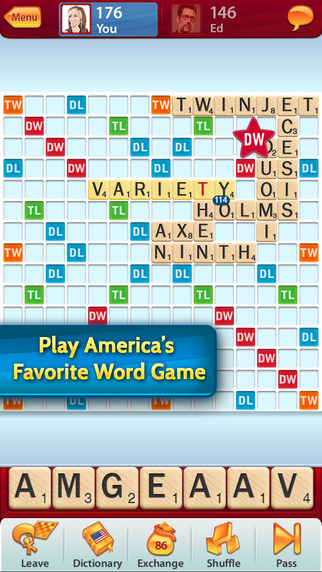 The Scrabble app for iOS offers five different game modes. First, you can play the game against your Facebook friends who also have the app installed in their devices. The app allows you to invite your friends to a match in real time. And while playing the game, you and your friends can have a friendly banter via the in-app chat feature.

Playing against a random opponent online is another option. With just a single click, you will be able to play against anyone. There is also a single player mode and multiplayer Pass N’ Play mode. And to get the feel of real Scrabble competition, the app offers Speed Play where you can set time limits for each turn.

Multi-language games are supported by this app. You can play a game in English, Spanish, German, French, Portuguese, and Italian. For the English version, you will be able to choose between three officially sanctioned dictionaries namely the Tournament Wordlist, Merriam-Webster, and the Collins-Dictionary.

Other exciting features of this app include: Facebook sharing, the in-app Teacher, and the ability to run multiple games at the same time. 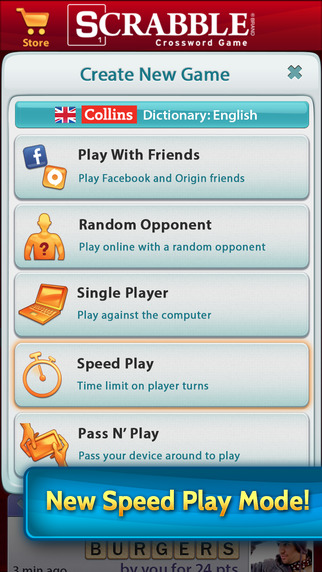 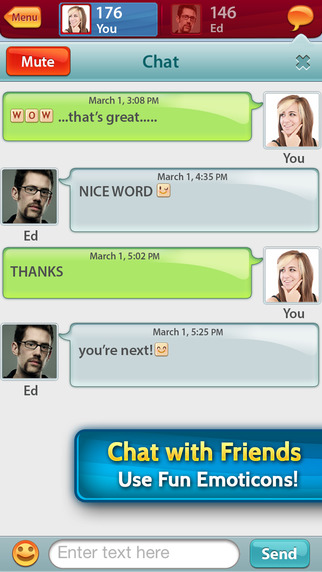 Whether you are an avid fan of classic Scrabble, or a casual gamer who likes word games, Scrabble app for iOS is a perfect fit for you. The app offers exciting gameplay with advanced features to keep you entertained.