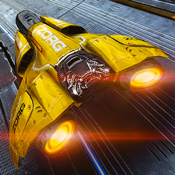 AG Drive is an epic version of the future, it gives you the ride of your life as you drive blazing fast anti-gravity race craft and race while racing against opponents on spectacular tracks that drive over and under an earth city of the future. The game has always been big, bold and colorful because of its overwhelmingly exaggerated fantasy, and futuristic racing games which are exceptionally gorgeous. The brilliant mind behind this iTunes app is ORG. this game is compatible with iPhone, iPad and iPod touch devices. AG Drive is an exquisite showcase to the world of what can be achieved when you blend true passion with cutting edge technological prowess.

How to play AG Drive

Like most futuristic racing games in the market, you can simply control your hovercraft by travelling at reckless speeds along the tracks with dips, dives, and loops that defy physics, doing so in time trials, standard races, elimination events, and even the occasional ‘reach a certain top speed benchmark’ challenge. Each vehicle has a unique special ability that charges up over time and can be deployed. The sensation of speed is fantastic and there's plenty of exciting moments in the racing when you hit a big dip or take a huge jump. Plus, the races are designed to be playable in short bursts, making this great for your mobile device.

Braking is certainly odd in this game, in that it drains your ship's health. It feels like a punishment for braking. It's an odd functionality, to say the least. This is especially so when considering that death by loss of health really isn't a threat, because you regenerate health quite often. You have 3 lives in each race, and you'll lose them by going off of tracks on the small sections where there are no walls. Enemy ships sometimes have things that can hurt or disrupt your racing, but ideally you're out ahead of everyone anyway. AG Drive uses tilt controls primarily to have you try to commandeer this mayhem. The indicator shows you how far you're tilting to one side or the other is also a prime feature that comes incredibly handy. AG Drive will take you on the ride of your life, letting you drive a blazingly fast anti-gravity (AG) craft. You’ll race along futuristic highways and tracks developed using the ZORG game engine. The result is an astonishing game environment that adds greatness to AG Drive.

AG Drive has everything you would ever yearned for in a great racing game, including main events, quick events and several modes of play such as single races, time trials, cups, speed challenges, record challenges, duels, and you know the rest. The tracks are set against various backdrops such as sunny, sunset and night, among others. The game also lets you upgrade your race craft. Adding value to the game is the catchy soundtrack, which will make you play it more and more as the funky electronic music eases the monotony of racing your AG race craft. When it comes to graphics, what else can I say? AG Drive is beautiful, colorful and out-of-this world. Graphics give you a taste of how racing will be in the near future. 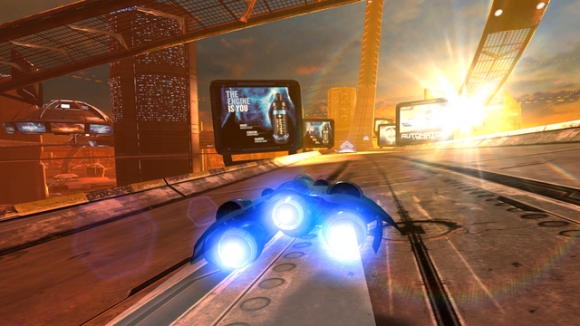 It's readily obvious that a lot of work went into making this game look as good as it possibly could have, it is superbly thrilling. Nice work!