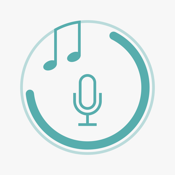 What the Song app review: the ultimate music identification app

You’re busy going about your daily routine activities when out of the blue, you hear a new song being played at a nearby store. This song immediately impresses you and you resolve to find out what song it is. Before the era of smartphones, iPads, and iPods among other devices, this would have called for you to jot down a few lyrics to Google later on. Presently, a plethora of song identification applications enables individuals to track down any stray tunes that drift into their ears. What the Song: music recognition app for iOS 7 is one such app that aids users to identify the songs they hear. This app was developed by Punicasoft. It uses English as the default language and the app is compatible with iPhone, iPad, and iPod touch devices.

This app functions by scrutinizing the captured sound and seeking a perfect match on an acoustic fingerprint contained in a database of over a million songs. What the Song app recognizes songs based on audio fingerprinting technology. Once users have tagged a certain song for a few seconds, the app generates an audio fingerprint. It then begins to search for the song in its database. Having found a match, the app returns information to the user. 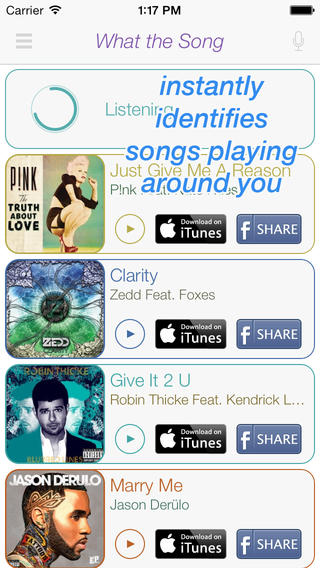 The best thing about What the Song is that it has fast music recognition ability. Once the app has listened to the song for a few seconds, it will provide the user with a best match of the song’s title. The user can then search for the song in one of the many music downloading sites. Besides notifying a user of the song’s title, the app also gives the user, the song artist’s name and a preview that lasts 30 seconds. This makes the user identify if that is the song he was looking for much faster.

Another key highlight of What the Song app is that it allows users to share songs through social media networks such as Facebook. Once a user has listened to a song, he or she may want to send it to a close friend for a particular reason. For instance, the song may contain an encouraging message for his friend. In such occasions, the share tool comes in handy.

What the Song app makes use of a user friendly interface. This app is perfect particularly for users who are new to music recognition software systems. The instructions on how to use the app are in simple and precise language. 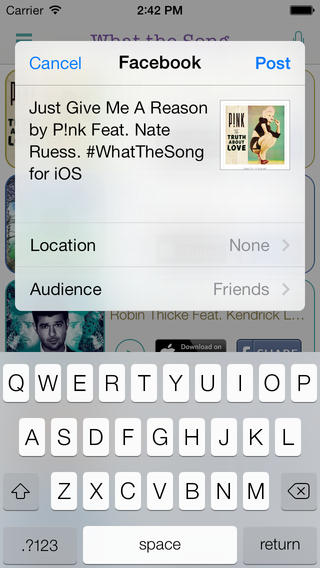 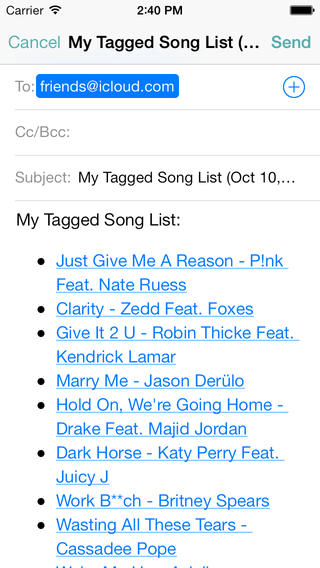 If you happen to hear a new song that you like, What the Song is an application that cannot only help to identify the song’s title but also the artist’s name and provide you with a brief preview.