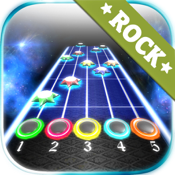 It was just a few short years ago that games like Guitar Hero and Rock band were the most popular games around. They may not be as popular as they used to be but they're still a lot of fun and there are a lot of games in the App Store that have tapped into the popularity of these types of musical instrument simulation games. Rock Guitar Legendary Hero is one of these apps and it does a credible job but unfortunately it doesn't have a great song selection which really reduces its appeal. This is a free app and it`s compatible with the iPhone, iPad, and the iPod touch.

Rock Guitar Legendary Hero has a similar look and feel to the more famous Guitar Hero although it's a lot more basic. There are no computer animated rock heroes and no stages in the background, just the guitar. It has the same type of colored buttons that were made popular in Guitar Hero and similar effects when you tap on the buttons but there's no toy guitar with this one; just your finger tapping on your iOS device.

My main issue with this one is the lack of popular song selections. In this free version there are only basic creative commons song selections too choose from, which is very disappointing. There are other song packs that can be purchased as in-app purchases but these don't seem to be popular songs either. Obviously obtaining the rights to use real rock songs would be expensive but without them this app just doesn't have the same appeal. You’ll need to make sure you have 76.4 MB of free space on your iOS device for this one. 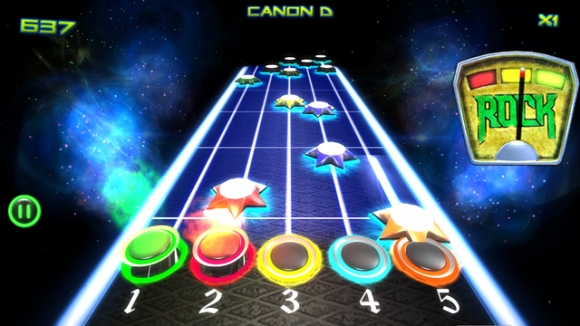 If you’ve played Guitar Hero this game will look very familiar to you. As the song plays you travel down a seemingly endless guitar neck, tapping on colored notes as you go. At times you’re only tapping on one note at a time but it can get quite difficult when you have to hit three or four notes in quick succession. This is much easier to do with a guitar; tapping on your iOS device with your fingers just isn’t quite the same. It doesn’t help that the music selection is so limited either. It’s a lot more fun playing this type of game when you can choose some of your favorite songs.

The app does have Game Center integration so you can see how you match up against others and you can also share your love of the game with your Twitter followers and Facebook friends. There’s also a multiplayer option in the game which is a great idea, but this game really suffers from its lack of musical selection. 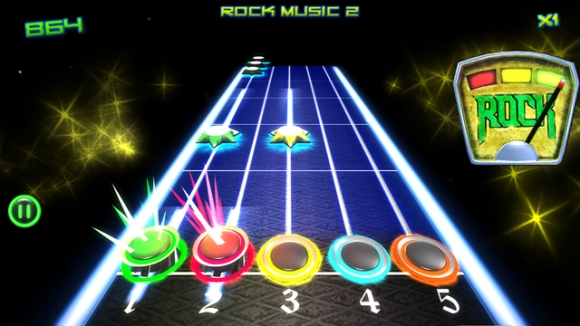 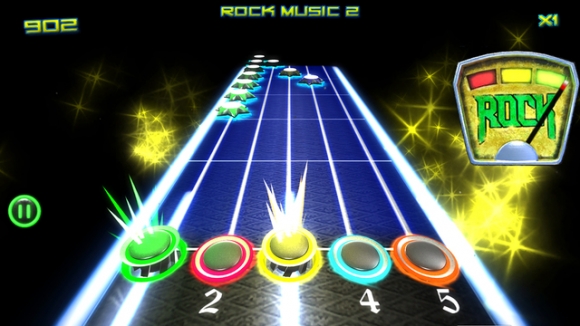 Rock Guitar Legendary Hero is a decent rock guitar simulation game but it suffers because of its lack of song choices. The actual game play will be very familiar if you’ve ever played Guitar Hero but it’s just not the same without the guitar. If you have a little time to kill you might want to give this one a try but it won’t keep you occupied for long.