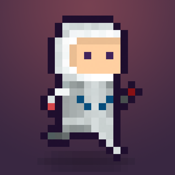 Lastronaut is a fun and addictive side-scroller in the tradition of games like Street Fighter from the late 'eighties. It also resembles Jetpack Joyride in its game play although the graphics are a lot more basic. If you like retro-style games then you’ll enjoy this one. This is a free app and it’s compatible with the iPhone, iPad, and iPod touch.

Platform games have become extremely sophisticated to the point where the graphics are so realistic it’s hard to know if they’re video games or videos. There’s a place for this type of game but there’s also a place for simple games with a retro look and feel. Lastronaut is a game that wouldn’t have looked out of place in the late 1980s. The graphics have the pixilated look that was common in the era but the game play is actually quite smooth which makes for an enjoyable experience.

There are no ads in this game, which is quite refreshing. There aren’t a lot of free games in the App Store these days that don’t include ads as well. It’s how most developers make money off of their apps so it’s surprising when a game is completely ad free. There really isn’t much to criticize in this one. There aren’t any instructions but the game is pretty easy to figure out so this really isn’t a major issue. 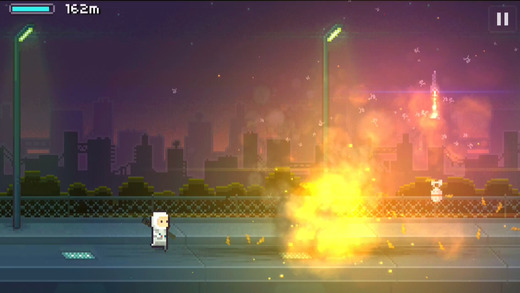 The game play in Lastronaut is pretty standard for an iOS side-scroller. Your character is an astronaut and as soon as you hit play the action begins fast and furious. The little guy will begin running automatically so you don’t have to worry about moving him forward but you are in control of making him jump and fire. In order to jump you simply tap on the left side of your device and to fire you tap on the right.  As you move forward you’ll have to jump over obstacles and avoid a continuous stream of missiles so you better be ready to tap. The background music matches the game play well and there are some really cool slow motion effects that add another element to the game.

The objective is to progress as far as you can without getting hit and to kill as many alien robots as you can. When you reach certain distance milestones you’ll unlock achievements that can help you with your progress and you’ll want to keep your eye out for weapons upgrades as well. It all happens at an extremely quick pace so you’ll need to keep your wits about you. Every time you achieve a new high score the game will notify you of your achievement and your score will be updated to the world leaderboard. The game uses the iOS Game Center for tracking high scores. 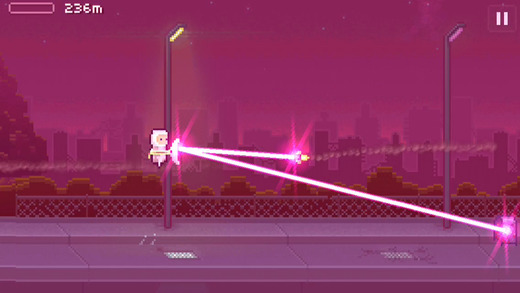 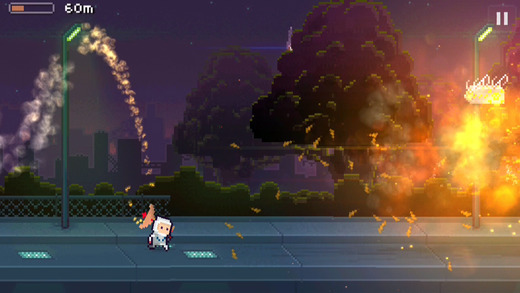 Lastronaut is an excellent free game with a retro style that’s fund and addictive. With no ads to worry about and endless gameplay, this one will keep you occupied for hours. This is definitely worth a look.