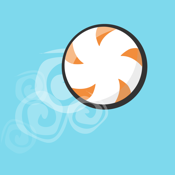 There are a lot of great app developers that develop apps for the App Store and while it may be a challenge coming up with something that hasn’t been done before they never seem to disappoint. Blast course is a puzzle game that’s definitely a little different. It’s a fun time waster that will make you think a little bit but for the most part the puzzles aren’t that difficult to solve. This is a free app and it’s currently only compatible with the iPad.

App Store games come in so many different shapes and sizes that there always seems to be something that will appeal to just about any taste. If you like challenging your brain a bit by solving puzzles then you may want to take a look at Blast Course. This is a puzzle game with a twist; or rather, a blast! There are multiple levels in this one so it will take you at least a few sessions to get through them all but it won’t be too long as they’re just not that difficult. The difficulty level does get a little harder as you progress but it’s nothing overwhelming.

What I do like about this one are the interesting graphics, to put it simply they’re fun. If you’re a fan of physics this game will really appeal to you – it’s all about taking advantage of slopes, levers, and using the power of the wind to your advantage. It will definitely awaken your inner scientist if you have fond memories of learning about the basics of physics in Grade Nine science class. This app will require 52.7 MB of free space on your iPad. 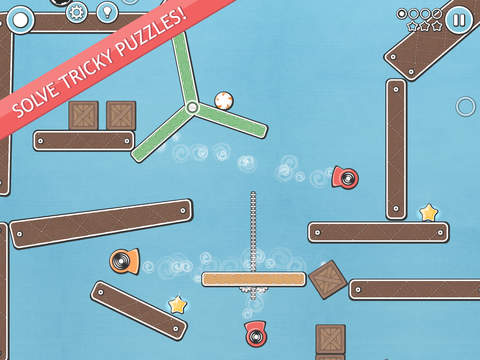 The first time you open Blast Course you’ll see three icons you can tap on. The first is just some basic information about the developer, the second will take you to the actual game, and the last option will take you into a settings field where you can toggle the music and sound effects on or off as well as resetting the game. When you play the game for the first time only the first level will be unlocked; you have to unlock the other levels by completing the previous level.

When you begin play on the first level you’ll notice a game with a series of ramps and stars, as well as a big hand pointing you in the direction of a circle with a little dot in it. When you tap on this dot you activate a fan which you can change the direction of in order to move the ball forward through the puzzle. The idea is to push the ball along using the power of wind collecting the stars as you go and ending up with the ball in the whole at the end of the puzzle course. If you do this successfully you’ll be able to move on to the next level. If you get stuck there is a hint icon you can tap on but you will have to view an ad before you can access your hint, which is a small price to pay to avoid a little frustration. 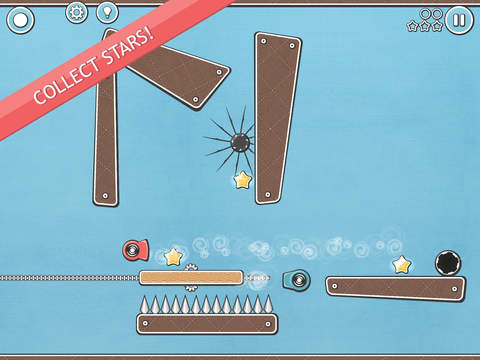 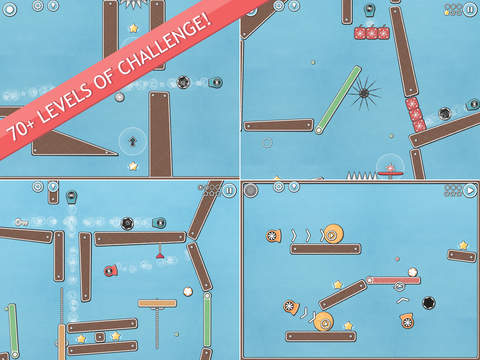 Blast Course is a decent puzzle app but it won’t take you too long to figure it out. It’s okay to waste an hour or two; after that you’ll probably want to move on to something else.