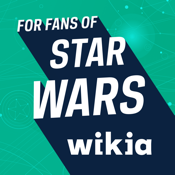 Star Wars is one of the biggest cultural phenomena of the last 30 or 40 years.  Every kid from the age of five to 45 is familiar with the Star Wars universe; that’s not to say everyone’s a fan but there sure are a lot of us! Wikia: Star Wars Fan App is the most comprehensive app for every Star Wars geek out there. This is a free app and it’s compatible with the iPhone, iPad, and iPod touch.

The best magazine apps for iPad

The Force is Strong

As a child growing up in the 'eighties, Star Wars was everywhere. There were toys, clothes, games, and even coffee mugs. That popularity may have dipped for a few years, but the franchise is now just as strong as it was in those early years and with a new Star Wars movie set for release at the end of 2015 that popularity is likely to continue growing. Wikia: Star Wars Fan App has everything you’ll need to keep up to date on everything that’s going on in the Star Wars universe. This app has everything from background articles on actors to news on upcoming plot possibilities.

The best alien abduction apps for iPhone and iPad

As enthusiastic as I was about this app I was just as disappointed to be greeted by a pop-up ad as soon as I opened it. There’s nothing wrong with developers wanting to get paid for their hard work but there are better ways to do it. The other thing I didn’t like about the app is that the articles seemed a little oversized for the app windows. It has the feel of content that was made for web pages and made to fit into an app window, which is likely what it is. There’s still a lot of great content here, and if you’re a Star Wars fan you’ll probably be willing to put up with this little inconvenience. This app will require 19.5 MB of free space on your iOS device. 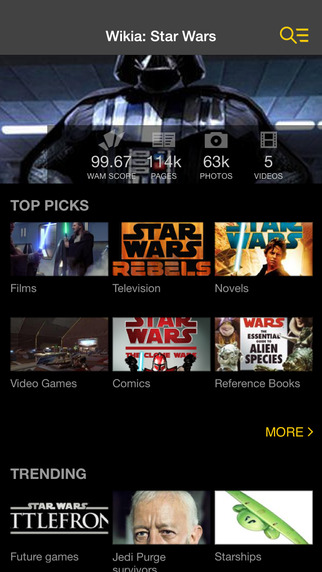 The Wikia: Star Wars Fan App has a pretty simple user friendly interface. There’s a menu bar at the top and one at the bottom; in between is the main window of the app where the main content is displayed. The bar at the top is simply a title bar with a basic search feature built-in for searching whatever Star Wars related topic you can think of. The bar at the bottom contains the main controls for the app. The main content is accessible by tapping on the home icon, but you can also tap on props to look at some of your favorite props from the Star Wars movies. There’s also a random section which you can tap on to access articles selected for you at random, as well as a communities section and a settings section. 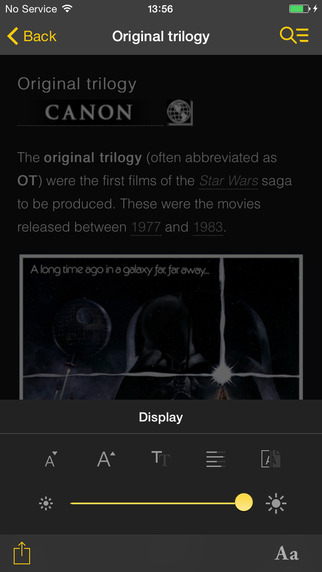 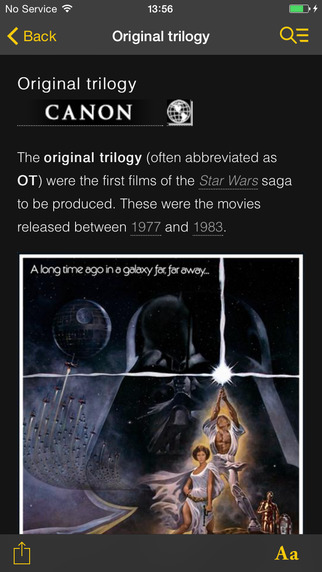 If you’re a big Star Wars fan you probably won’t want to be without the Wikia: Star Wars Fan App. This app has comprehensive background articles on all your favorite Star Wars movies and characters. There’s also a great section that describes the props used in the movies. There are a couple of drawbacks but nothing that will keep you from enjoying the app.