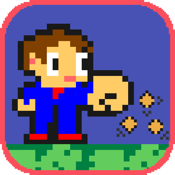 Video games really came into their own in the 1980’s with the introduction of games like Pac Man, Donkey Kong, and of course Super Mario Brothers. While these types of games have long since been upstaged by games that are more and more sophisticated every year, these classic games never seem to lose their appeal entirely – the App Store is full of 8 bit video games that attempt to recapture their look and feel. Punch Kidd is a pretty decent effort in this category. This game features all the classic jumping, punching, and coin collecting that was made so popular in the Mario series of games, with a few interesting quirks of its own. It’s an entertaining effort, but it would benefit from a couple of improvements. This app is available for purchase from the App Store at a cost of $1.99 and it’s compatible with the iPhone, iPad, and iPod Touch.

Classic style video games are not uncommon in the App Store – many developers have tried to recreate the magic of the 80’s to varying degrees of success. If an app's going to have a chance to accomplish any success in this category it needs to have a few key features: it needs to have a cute little character you can control, there has to be multiple worlds to explore, and there needs to be lots of challenges in your way. Punch Kidd has all of these things, and as you try to complete each level there’s lots of coins to collect along the way. If you were a big Mario fan this game will be very familiar to you.

It does have a couple of issues though. The most glaring one is the stiffness of the controls – the simulated controller just doesn’t have the quick reaction time you would expect which makes it difficult to get used to. It’s hard to avoid the monsters if you can’t make a quick getaway. The other problem with this one is that it lacks any kind of instructions. These simple games aren’t that difficult to figure out, but it always helps to have some kind of explanation of how the game works. This app will require 6.3 MB of available space on your iOS device. 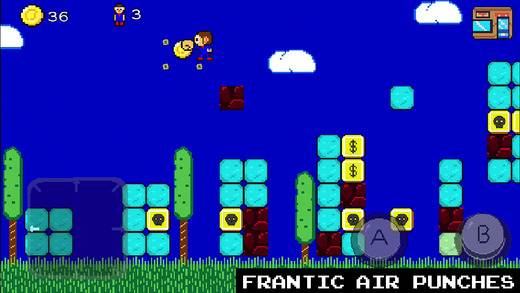 The graphics in this game have a lot of similarities to the Mario games. The main difference is that the object is to move your character down through the levels rather than sideways. There are dragons and ghosts to avoid – although it’s really difficult to get away from the ghosts once they’re released. As you move down you’ll also want to collect as many coins as possible. These are often hidden in bricks that you have to punch your way through. The coins can be redeemed later for different items that can help you progress through the levels.

To control Punch Kidd there’s a simulated gamepad in the bottom left corner of the screen, to jump you press the B button on the bottom left side, and to punch you hit A. It’s pretty simple, but unfortunately the gamepad just isn’t that sensitive – I often found myself over hitting my target. You start with three lives although you can collect more as you go, and once your game ends you can share your score through social media if you like. 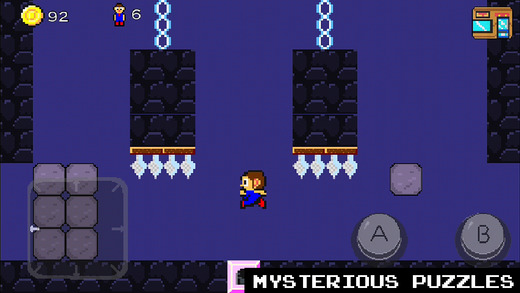 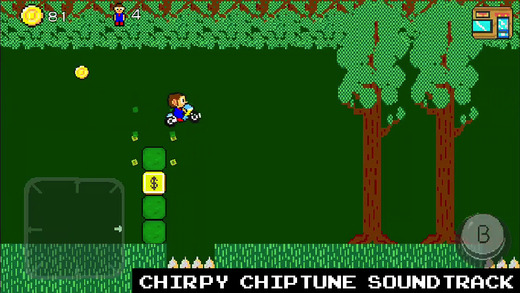 If you enjoy classic 80’s style video games you may want to give Punch Kidd a try. It has all the classic features of the Mario style of video games, with levels to clear, monsters to avoid, and coins to collect. It’ just too bad the controls didn’t work a little better – if they did the entertainment value of this effort would be a lot higher.